One of the hottest Gambian artists is making his way in the United Kingdom, where he is residing and making a name for himself in the music arena. Nu Chilly as he is called is a Gambian musician who hails from the coastal town of Bakau. In an interview with The Point Entertainment via email, Nu Chilly talked about his music career, achievements, album and shortcomings. Nu Chilly whose real name is Wally Bobb said his music named 'Nu Chilly' means the 'Hot Things'.

"I started with the Afro-manding sounds, which still have a strong influence on me. I am still a reggae artist, you know, but, I play all varieties of music. When the album is out, you will see what I mean," he added.

Nu Chilly said he began his journey in 1989 when he joined the music business for over two decades, adding that he worked with a music band called Jah Light band, a top reggae band based in London.

"I am a solo artist. Ever since 1997, I have been writing about my experiences in life and translating it into reggae that everyone can relate to. I am setting up my own record label, which will be called Nu Chilly Records, but I work with different producers around the world who have all contributed in my upcoming album. Hakim of the Suns of Light, Ikali of the musically-minded production outfit, Chop Chop Productions in Jamaica, Doobie Productions in Sweden. They all helped with production of the album,” the rising star announced. He said he had performed a lot in Gambia and in the UK.

"I have performed in Birmingham, Brighton, London and all around Britain. When I was living in Germany, I did some shows in Berlin and Hamburg with Timeless Sound and the Mamma Africa Sound. Every show is my favourite as far as the music is playing, and the audience are happy.

"Nu Chilly Rise is a big hit in Gambia, and is one of the people's favourite. Black and Beautiful is also a nice one in my upcoming album. I don't play any covers, but I have a remix of By the Rivers of Babylon which I titled By the Rivers of Gambia which is an amazing piece of music, which I hope people will love because it is a type of music for the young and the old alike." Nu added.

He further told our reporter that he wrote his own songs noting that he is a song writer. "I am from the people, and I sing about the people. I talk about life, and life always changes.

"I write the lyrics first, and then I advise the producers on the beat and give them an idea of what I want. They give me their view, and also direct me around the studio from time to time. Once we bring the two together, we take it from there."

Asked how his music has evolved, since he first began playing music, Nu had this to say: "Obviously the drums and the afro manding sounds are very different from the reggae influence. Both can work together, as I have tried to fuse both styles.

"I have a tune in my album which is in Mandinka, which I have modernised into a reggae song. So you can see that I take all the influences from my life and bring them into the current context, which everyone can appreciate."

Gambia set to begin AFCON Qualifiers against Benin in June 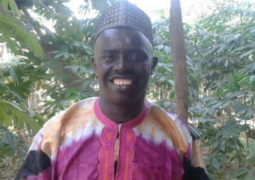