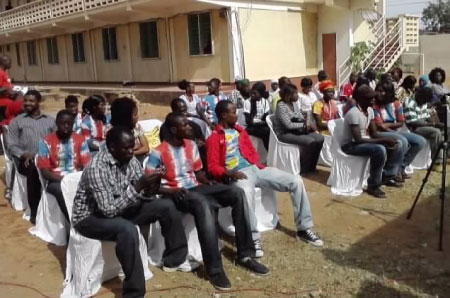 A three-day youth trade fair and skills exhibition organised by the Gambia Young Men Christian Association (YMCA) wrapped up recently at the YMCA grounds in Kanifing.

According to organizers of the fair, the call for the hosting of the trade fair and skills exhibition for the youths emanated from the recommendations of the last September youth employment summit held at the Paradise Suites Hotel in Kololi.

Speaking on the occasion, Musa Mbye, deputy permanent secretary at the Ministry of Youth and Sports, underscored the importance of the trade fair, while commending the YMCA for organizing the event.

The objective of providing employment for the youth of the country has always remained a top priority on the government’s development agenda.

“National development is a progressive and constructive process of engaging all citizens in building social cohesion, economic prosperity and political stability,” Mr Mbye said, adding that the involvement of youth in national development “is a must”.

DPS Mbye said further: “Young people should be social actors of progress because they are a crucial segment of a nation’s development and their positive contribution therefore is highly needed.”

He said that for communities to enjoy economic independence, young people must be supported to get themselves engaged in meaningful livelihood development initiatives through entrepreneurship.

He appealed to the public to engage the youth by patronising their products while also encouraging the youth to interact with one another, share ideas and maintain network to get their trade carried.

He finally reassured the YMCA of the continued partnership and support of the government through the Ministry of Youth and Sports in the development and empowerment of youth.

Speaking earlier, Joseph Peacock, YMCA BLF coordinator, said the three-day event was an opportunity for the young entrepreneurs to market themselves.

“This is the last national event of the BLF funded project,” he said, adding that the project would finally phase out on 6 January 2011.

The BLF coordinator further noted that it has not been easy in carrying out the project, since “the challenge was there, especially in microfinance”.

However, he reiterated: “YMCA is a responsive organisation, and will continue to address the needs of young people as they are brought forward.”

Oreme Joiner, board chairman of YMCA, indicated that the BLF project of entrepreneurship and microfinance ‘supports’ employment opportunity for young people.

“It has been a problem in this country to give a start-up capital to entrepreneurs. The YMCA through the BLF project has made that possible,” Mr Joiner said, while giving a word of caution to beneficiaries of seed capital loan to ensure they pay back so that others will have the opportunity to benefit from the support scheme.

He added: “Such an opportunity should not be wasted; we cannot replicate this type of programme without being able to collect back some of the funds that we have given out.”

He urged beneficiaries of the loans to assist their regional officers to collect or get information from them about people defaulting in paying back to the YMCA loans given to them.

A high-powered delegation at the event led by   DPS Mbye took a conducted tour of the trade fair stalls.