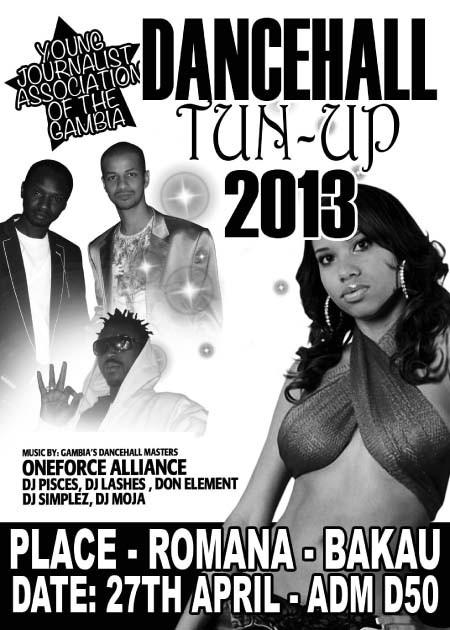 The Young Journalists Association of The Gambia (YJAG) is to hold a mega dancehall musical show with one of the most renowned DJs in the country, DJ Pisces, on 27 April 2013 at Romana Hotel in Bakau.

The fundraising is meant to gather more funds for the association to embark on more capacity building programmes for its members, the young journalists, for them to become responsible journalists who will be able to contribute their quota to the development of The Gambia.

Lamin Jahateh, secretary general of YJAG, reiterated that proceeds from the programme will also be used to implement a line-up of activities which the association is to hold but could not due to the perennial problem of lack of funds.

"The worthy goals of the association cannot be achieved without funds," Jahateh said, adding: "This is why it is imperative that we devise ways and means of raising the much needed funds. It is in cognizance of this that the forthcoming programme is being organised."

Nyima Jadama, public relations officer of the association, called on everyone to attend the show, saying: "This show will be one in town." Ticket for the programme is only D50, she added.

The president of the association, Modou S. Joof, said all journalists, particularly YJAG members, are encouraged to attend "as the proceeds will be used for the collective good of all".

The YJAG president called on the general public to patronize the association and support the young journalists to achieve their objectives.

YJAG embarked on its first-ever successful fundraising show in July 2011 at the Buffer Zone in Tallinding with the popular Senegalese drummer Sheikh Faal and his Group.

YJAG is an independent non-profit making organization and it is legally registered with the Attorney General’s Chambers in September 2007.

YJAG has members from both the print and electronic media houses nationwide.

The objectives of the association include promoting unity among young journalists in The Gambia, providing capacity building, and addressing the welfare of its members.