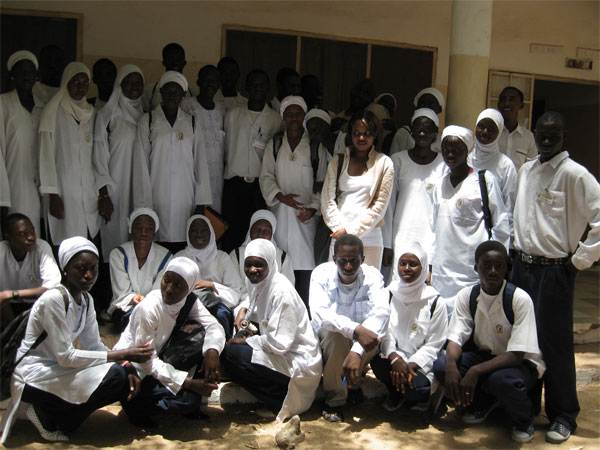 One fundamental objective of the Young Journalists Association of The Gambia (YJAG) is to facilitate the recruitment of young people in to a career in journalism. It is against this background that the executive of YJAG on Saturday commenced a weeklong nationwide tour of schools to meet and build relationships with writers clubs.

Nustrat Senior Secondary School was the first point of call for the YJAG executive thanks to the active nature of the press club of the school.

In his welcoming remarks, the press club coordinator of Nusrat, Mr. Manjang, applauded YJAG for choosing Nusrat as their first point of call.

Ms. Aminata Sanneh, Treasurer of YJAG, encouraged her fellow women to also venture in to a career in journalism citing example of great female journalists in the country and the world at large.

For his part, Mr. Nfamara Jawneh, the president of YJAG, thanked the Nusrat press club and their coordinator for a warm welcome accorded to him and his delegation. He also thanked the said press club for participating in the launch ceremony of the association. " We want a strong and long lasting cordial relationship with all press clubs in the country.  Mr. Jawneh advised the students to always read both local and international newspapers and to listen to news bulletins in order for them to become great journalists in future. The YJAG leader used the opportunity to clarify the differences between  the Young Journalists Association of The Gambia and Young People in the Media.

Abdul Kabir Daffeh, president of Nusrat Press Club, thanked the YJAG delegation for the visit while appealed for support to press clubs at school level.

The meeting ended with a question and answer session in an interactive manner.