Speaking at the handing over ceremony, the FAO Country Representative Hon. Baba Gama Ahmadou stated that telefood is FAO's global effort to raise awareness about hunger and food insecurity. Noting that it is an effort to mobilise resources for hundred of hunger-fighting projects, he said, it is also in response to the 1996 World Food and Summit's call to action to eradicate hunger.

According to him, the telefood committees in the have over the years managed to raise significant amount of fund locally by organising  telefood events like fishing days concert and international food fairs. He noted that the funds raised from these events were transferred to the global telefood as contribution by the to show our commitment for the alleviation of poverty and eradication of hunger.

"The first project we are handing over today is the GAMAKU Women's Vegetable Garden Project. This project will benefit 15 youths, located in Malainbaya and Kubariko, the project budget is $5,474 for a duration of 12 months and the main objective of the project is to assist women gardener of these three villages to have access to an additional well quality seed and furthermore gardening equipment."

"The second project is the youth poultry project which will also benefit 15 youths located in these three villages, at the tune of $88,292.53 for a duration of 12 months. The overall objective of the project is to make the participants from these villages more self-sufficient in the production of poultry products," he stated.

For his parts, Mr. Mambabou Sowe, the Coordinator of YAFSEE said it was first established in 1989, aimed at reducing the burden of poverty.

He disclosed that YAFSSE has installed 36 water taps in three villages, noting that without water nothing is impossible.

He also advised the beneficiaries to take proper care of the project. He thanked the FAO for what he described as their wonderful effort.

Mr. Alhagie Bakary Trawally, the Permanent Secretary at the Ministry of Agriculture, also expressed delight at the gesture. As he put it, the project will not only benefit the area, but other communities.

The other speakers included Haruna Tamba and Cherno Jammeh. 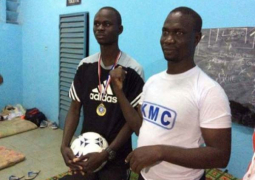