Sulayman Bah, the boyfriend of the late Ya Binta Jarju, who died in a shooting incident, on 24 March 2015 continued his testimony under cross-examination before Magistrate Patrick Gomez of the Kanifing Magistrates’ Court in the case involving one Mustapha Njie, a driver, who was charged with four counts.

He has already been convicted on counts one and four, following his plea of guilt, but denied counts two and three.

Defence lawyer Edu Gomez asked the witness whether the security vehicle overtook the vehicle driven by the accused before three warning shots were fired.

Mr Bah said the three warning shots were fired, after the security vehicle overtook the taxi.

It was put to him that when the security vehicle followed the taxi he was in and they fired at it, he said he could not say they were shots but he heard a shot at the back of the taxi.

Mr Bah testified further that he battled with the driver, when the shots were fired.

Asked whether he battled with the driver so that more shots would not come, Bah said after the shots, he pounced on the driver, because if he continued driving the shooting might continue.

He added that when the taxi stopped, he turned his attention to the late Ya Binta, and found there was blood all over her head.

He did not know where the blood was coming from, stepped out of the taxi and shouted for help.

Mr Bah added that when he took Ya Binta from the taxi, he asked the security officers to assist him take her to hospital, because he could not believe that she was dead.

The security officers did not help him to take Ya Binta to hospital, but instead one of them told him that they would communicate with Manjai Police Station, and then they left him there with Ya Binta Jarju.

Still testifying under cross-examination, he further told the court that the security officers did not arrest the accused, but instead Njie was arrested by the landlord.

Mr Bah added that he did not see the windscreen of the taxi after the shooting from the back; that he was not arrested at the scene, and that he communicated with his family.

He testified that he was later arrested and was not charged with any offence; and was granted police bail.

Mr Bah was detained at police headquarters in Banjul; where he was told that they would detain him for a while, otherwise he would “do something unpleasant.”

Apart from the landlord, other people came to the scene because of the shooting, and one Mr Sambou, a friend of his, was comforting him at Manjai Police Station, Bah further told the court.

The second prosecution witness, Fullo Mbye, was next to testify.

The witness lives at Kotu and he is a superintendent police officer commanding Serrekunda Division. His responsibilities include the supervision of all cases in his division.

He adduced that on 7 March 2015, between 8 p.m and 11 p.m, he was at the Kotu Police Station, and received information regarding the shooting incident at Manjai.

Corporal 3957 Sainey Bajinka of Manjai Police Station informed him that there was shooting incident at Manjai involving a lady, who died on the spot around Erijang area.

Mbye told the court he then boarded a vehicle to Manjai Police Station, where he found the accused and Sulayman Bah, who said he was a friend to the deceased.

Mr Mbye then left Manjai Police Station and proceeded to the scene with some police officers, where on their arrival he found the body of a lady onboard the taxi. He asked the police photographer to take some photos, and this was done.

The body was removed from the taxi, and was taken to the hospital in Banjul; the taxi was taken to Manjai Police Station, where he also took the accused person and Sulayman Bah.

They were later taken to Kairaba Police Station, where the case was handed over to the CID for investigation.

Asked, under cross-examination, whether he tried to find out what could have happened to Ya Binta Jarju, Mbye said he was informed about a shooting incident, adding that from his observation Ya Binta Jarju was not alive.

Asked whether he saw the rear windscreen of the taxi, the witness said it was broken. 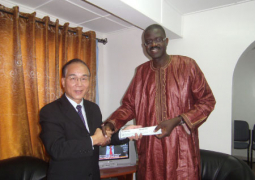