The Gambia through the Ministry of Health and Social Welfare and its partners joined the globe in celebrating the World Sight Day.

Celebrated in Jarra Soma in Lower River region (LRR) on October 10 the event focused on the theme ‘Universal Eye Health’.

The festivities of the celebration were sponsored by Sightsavers, the European Union and Standard Chartered Bank with the aim to create awareness on the global issue of avoidable blindness under the coordination of the International Agency for Prevention of Blindness (IAPB).

Globally, World Sight Day is supported by over 120 IAPB member organisations which include major eye care NGOs in the world, apex professional bodies for Ophthalmology and Optometry, teaching hospitals and corporations united to eliminate avoidable blindness and visual impairment.

Bala Musa Joof, Project Officer for Sightsavers Post HFPI project for the Gambia and Guinea Bissau, said at the meeting that the Universal Eye Health theme embodies many critical aspects of successful eye health uptake to roll on for the next couple of years.

“Get Your Eyes Tested”, he said is the call to action for this year which recognised a vital aspect of a successful and sustainable eye health network.

According to him, key performance indicators collected from eye units in the year 2012 showed a total number of 101,397 patients countrywide, out of which 60% of the 4,661 patients seen in the Lower River Region, the host region of the world sight day celebration were treated.

“During the same period, a total of 3,352 cataract surgeries were conducted countrywide from which 100 surgeries took place in the LRR.

The eye health team in the region also visited 37 schools and screened 517 schoolchildren and a total of 4,096 community members were screened,” he said.

Speaking on behalf of the Lower River Regional Health Director, Abdoulie Juum, Principal Public Health Officer for the region, said the Soma Major Health Centre has realised an increased in the uptake of cataract surgeries over the years.

He explained that the increased in cataract surgery at the health centre can be attributed to good surgical outcome, free cataract surgery due to sponsorship from philanthropists like Friends of Sankwia Cataract Fund, Standard Chartered Bank, Fresh Start Foundation and Whitmore Trust.

Lamin Sanyang, West Coast Regional Senior Ophthalmic Medical Assistant who represented the Manager of the National Eye Health Programme said the high cataract surgical rate and the reduction of Trachoma to below 5% in the country is an indication of a well done work of the eye programme.

He recalled that when the eye programme was established in 1986, cataract was responsible for 47% of blindness, Trachoma 17% and other corneal opacities mainly associated with childhood measles or harmful traditional eye medicine 11%.

From a rapid assessment for avoidable blindness conducted in 2007, he said it was concluded that the overall blindness prevalence of The Gambia is 0.4%.

In his vote of thanks, Sheriff Bah, senior Ophthalmic Medical Assistant at the Soma Secondary Eye Unit, observed that with the philosophy of Universal Eye health, no one should lose their sight from a preventable or treatable cause.

He used the opportunity to highlight some of the challenges they encounter in the implementation of the National Eye Health activities in the region.

Among them, he said is shortage of trained staff, medication and surgery tools and delay in the promotion of staff. 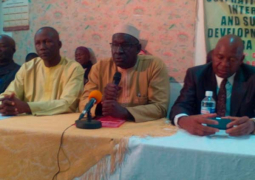