The ongoing World Cup in has so far been a show of embarrassment for Africa's standard-bearers - , , hosts , and the .

The prospects of an African team making it to the next round did not seem bright, until on Wednesday when Ghana managed to go through, and which so far has admirably represented Africa at the global tournament.

The fact, though, is that the performance of African teams in this first World Cup tournament held on African soil is not in the least satisfactory, and this for a continent which was widely criticized when South Africa was chosen as venue for the finals.

While some say African football needs to "go back to the drawing board", if it is to succeed in future World Cups, many are of the view that a lack of investment in local coaches and youth players are some of the reasons behind Africa's poor performance.

For instance, are the first World Cup hosts not to progress past the first round, despite beating on Wednesday.

Indeed, African teams have been criticised for their poor performance at World Cups and, if they fail to capitalize on this one, cynics will point to the fact that definitely does not have what it takes to win the World Cup be it played on the continent or elsewhere.

It is our belief, however, that if African football is to move on, local officials in charge of football, at all levels, including coaches, as well as players should look to foreign leagues to gain expertise and professionalism.

Whatever the case, has performed satisfactorily, since the start of the tournament, and must maintain this to do proud.

They should spare no effort to redeem s pride and prestige in world football, and we pray that they go all the way to win the coveted trophy.

Actually, it is not too late for an African team to spring a surprise!

The great burden is now on and , the only two African teams still playing.

"If you think squash is a competitive activity, try flower arrangement." 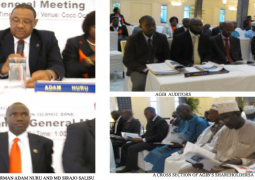