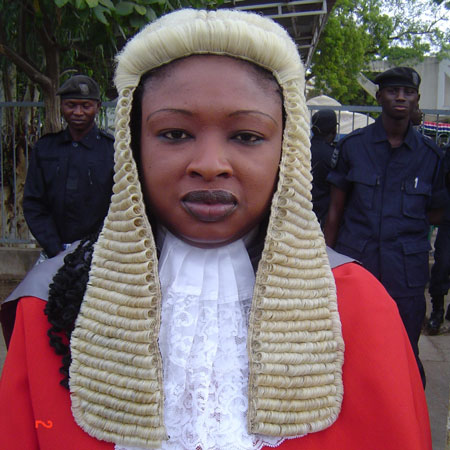 Justice Naceesay Sallah-Wadda has said the Women’s Act 2010 and its amendment, prohibiting female circumcision, has effectively taken full advantage of the salient provisions of the Maputo Protocol in the government’s resolve to protect the rights of women and girls in all its necessary forms.

Justice Sallah-Wadda was speaking at the opening of a two-day workshop organised by the Institute for Human Rights and Development in Africa (IHRDA), in collaboration with the Female Lawyers Association of The Gambia (FLAG).

The theme of the workshop was: “Advancing Women’s Rights in The Gambia through the use of international legal instruments”.

According to her, various other recent enactments in The Gambia such as the Women’s (Amendment Act 2015), prohibiting female circumcision as well as the Sexual Offences Act, 2013 ,are milestone legislations aimed at protecting the rights that have been guaranteed by the Protocol.

Justice Sallah Wadda noted that the workshop’s main objective would not only raise the awareness of women to the existing national and international legal instruments, that exist in The Gambia and in Africa for safeguarding and the protection of the rights of women, but also would serve as a forum in raising the awareness of women as to how to make use of these instruments, as and when the need arises.

The African Charter on Human and Peoples’ Rights, which has now been ratified by all the 54 member states of the African Union, is the parent treaty of the Protocol on the rights of women in Africa.

She added that the African Charter itself provides for the protection of various human rights; that is, from the protection of the general fundamental rights to those of specific groups, such as the rights of women.

She pointed out that Article 2 of the African Charter enshrines the principles of non-discrimination, including on the grounds of sex, and Article 18(3) calls on all state parties to eliminate discrimination against women, and to ensure the protection of the rights of women as stipulated in international declarations and conventions.

Justice Wadda noted that the challenges in The Gambia, in her view, remained in the areas of lack of awareness of the various legislations protecting the rights of women, as well as the unwillingness in many cases of having womenfolk report instances of violence and abuse being meted out to them.

She said the workshop was not only timely, but a right step in the right direction and, therefore, urged the participants to make full use of it.

In her opening remarks, Janet Sallah-Njie, the board chair of IHRDA, said the training workshop on the application of the Maputo Protocol is pertinent for the advancement of the rights and welfare of women in The Gambia.

She said experience has shown that women’s rights advocates and litigators always have a preference for domestic legislation, and are mostly unfamiliar with international instruments protecting women’s human rights.

She expressed optimism that at the end of the two-day workshop, the participants would be trained to build the capacities of key actors, so they would be able to improve enforcement of these international instruments as a means to uphold women’s rights in The Gambia.

The Executive Director of IHRDA, Gaye Sowe, in his welcome remarks, said the participants would be trained on opportunities presented by the legal instruments for the promotion and protection of women’s rights, particularly monitoring and reporting on state compliance, and litigating women’s rights, especially violence against women.

The IHRDA director said the workshop would help the participants in using not just the domestic laws, but the Maputo Protocol in advancing the rights of women in the country.