Facts and Figures: HIV and AIDS

·   Globally, in 2015 there were an estimated 2.3 million adolescent girls and young women living with HIV that constitute 60 per cent of all young people living with HIV.

· 58 per cent of new HIV infections among young persons aged 15-24 in 2015 occurred among adolescent girls and young women .

·  There are significant regional differences in both the new HIV infections among women and in the proportion of women living with HIV (15 and older) as opposed to men, and the gaps are even more notable among young women (aged 15-24) versus young men:

o    In Latin America, women represented 29 per cent of those newly infected; while young women aged 15-24 made up 36 per cent of new infections.

o    In Asia-Pacific, women accounted for 32 per cent of new infections; as the numbers reached 41 per cent among young women aged 15-24.

·   Specific groups of women are disproportionately affected by HIV. An analysis of studies measuring the pooled prevalence of HIV in 50 countries estimated that, globally, female sex workers are approximately 14 times more likely to be infected than other women of reproductive age .

Since the start of the global HIV epidemic, in many regions, women have remained at a much higher risk of HIV infection than men. Young women and adolescent girls in particular, account for a disproportionate number of new HIV infections among young people living with HIV.

Moreover, HIV remains the leading cause of death among women of reproductive age, yet access to HIV testing and treatment remains low.

Why are women particularly at risk of HIV

A number of studies show that intimate partner violence (IPV) increases the risk of HIV infection as well as unwanted pregnancy. For example, a study from South Africa found that young women who experienced IPV were 50% more likely to acquire HIV than those who did not experience violence.4

Societal norms regarding IPV also increase a woman’s risk of HIV. A study from Tanzania showed that while women are expected to be loyal to their partner even if they are in an abusive relationship, men are encouraged to engage in unprotected extramarital sex.

Another study of over 20,000 couples in India found that abusive husbands were more likely to be infected with HIV than non-abusive husbands.6 In 2012, 37% of women living with HIV worldwide were thought to have been physically assaulted.7

Disproportionately high levels of HIV infection are found among young women in relationships with older men. Relationships with large age differences are commonplace in sub-Saharan Africa and are often associated with unsafe sexual behaviour and low condom use due to unequal power in the relationship.8

In some countries, women face significant barriers to accessing healthcare services. A lack of access to comprehensive HIV and sexual and reproductive health (SRH) services means that women are less able to look after their sexual health and reduce their risk of HIV infection.

In many settings, access to youth-friendly SRH and HIV services is inadequate, and where they do exist, is primarily for married women with children. In Kenya, Rwanda and Senegal, over 70% of unmarried sexually active girls aged 15 to 19 have not had their contraception needs met due to age restrictions.

Moreover, healthcare providers often lack the training and skills to deliver youth-friendly services and do not fully understand laws around the age of consent and abortion legislation. This can lead to women choosing to have an abortion because they are misinformed about their options and how to protect their health as well as their child’s.

Even where women are able to access HIV and SRH services, stigma and discrimination create additional barriers. Judgemental attitudes of healthcare professionals around youth sexuality can result in the denial of healthcare services, while others are coerced into using them.

There is a wealth of evidence that shows how increasing women’s educational achievement is linked to better HIV and SRH outcomes.

When girls attend school, the likelihood that they get married or pregnant when young decreases.  However, in sub-Saharan Africa, 80% of young women have not completed secondary education and a third cannot read.

As many girls drop out of school, their male peers are more likely to access comprehensive sex education. SRH education builds awareness of HIV and how to negotiate relationships, so it is crucial that access to education is scaled up for women.

However, many women who do remain in school do not receive adequate HIV and sex education.  In sub-Saharan Africa, only 28% of young women reportedly know how to protect themselves from HIV. In many places, schools are not guaranteed safe learning environments for young women. One study from South Africa found that 30% of young female rape survivors were assaulted in or near their school.

Lack of recognition under the law and legal restrictions

Mandatory parental consent has been shown to deter young women from accessing vital HIV and SRH services due to fear of disclosure or violence. The proportion of women, who have experienced physical or sexual violence and then seek help, ranges from just 18% in Azerbaijan to 52% in Colombia.

In many places, discriminatory social and cultural norms are translated into laws which repress the autonomy of young women. For example, many become pregnant within child marriage. In 146 countries, laws allow girls under 18 to marry with the consent of their parents, while in 52 countries, the same applies to girls under 15.

Age-restrictive laws, such as those that ban contraception under a certain age, also act as barriers to healthcare for young women. As a result, young women face a much higher risk of HIV infection than women in the general population.

Women belonging to other key affected populations are also negatively affected by laws that criminalise injecting drug use, sex work and homosexuality.

For example, in many countries healthcare services for female sex workers are not available to those who are under the age of 18. Limited access to these services for women who inject drugs is well documented

A major gap in HIV service provision for women can be found in HIV testing and counselling (HTC), with HTC a vital gateway to treatment services.

In many parts of the world, access to HIV testing is particularly low among young women. Only 15% of women aged 15 to 24 in sub-Saharan Africa were aware of their HIV status in 2013.

By comparison, access to HTC for pregnant women is rising but remains too low. In 2013, 44% of pregnant women living with HIV in low- and middle-income countries received HTC, up from 26% in 2009.

Community and home-based testing have been put forward as an effective way of reducing the social and economic costs of going to a facility to test. It is also important that pregnant women who test negative have the opportunity to retest to identify seroconversion (the development of antibodies to HIV) during pregnancy or breastfeeding. Moreover, all testing and counselling should be provided confidentially and voluntarily.

The WHO promotes a number of approaches to help reduce women’s vulnerability to HIV. A few of these are discussed below.

In terms of preventing the sexual transmission of HIV, addressing poverty has been shown to reduce sexual risk behaviour, particularly among young women in low and middle-income countries.

School-based interventions aim to promote equitable gender norms before other norms are fully ingrained in the lives of adolescents. Increasingly, school-based curricula are being implemented to address IPV and prevent HIV.

A 2011 systematic review of engaging men and boys through school education recorded reductions in sexual violence and other forms of violence in seven out of nine studies. Of the 47 studies that examined attitudes towards acceptability of violence, ten showed significant improvements in attitudes and less tolerance of violence against women.

Another study covering comprehensive sex education showed that in Ethiopia, where sexuality education is a compulsory part of human studies and has strong links to youth-friendly services, 4,300 unintended pregnancies, 7,200 STIs and 2,000 HIV infections among adolescents aged 15 to 19 were averted between 2001 and 2009.

Risk-reduction education and counselling includes specific messages about equitable decision-making with partners; violence against women and its links to HIV; supporting women to negotiate safer sex in unequal power relationships and provides referrals to support services. 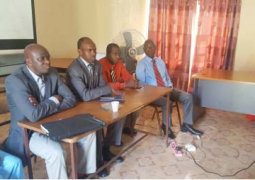