A woman called Fatou Njie was recently arraigned before Magistrate Jallow of the Kanifing Magistrates’ Court, charged with stealing.

The alleged offence read that on 29 March 2011, at Serekunda, in the , the accused, Fatou Njie, fraudulently converted D30,000 being monies given to her by one Lamin Barrow for safe keeping.

She pleaded not guilty of the charge and was granted court bail of D50, 000 with a Gambian surety who must deposit an affidavit of means and an ID card. 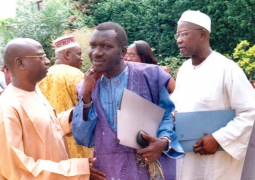