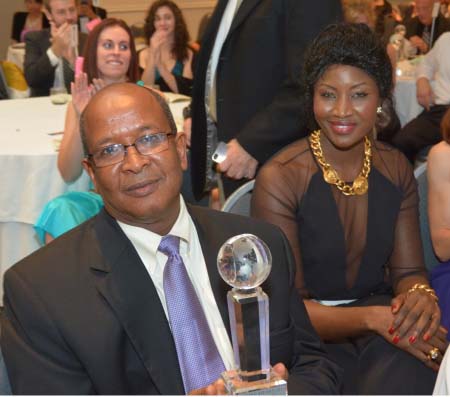 The nominees came from around the world, from all the main movie industries such as Hollywood, Nollywood and Bollywood.

Binta has beaten all those celebrities, from the world famous and experienced Hollywood super stars, to Nollywood queen beauties, and from the unbeatable Bollywood goddesses to independent actresses.

His Excellency Mr Baboucarr Jallow, deputy head of mission of the Embassy of The Republic of Gambia in the US, was at the heart of the ceremony to represent The Gambia.

Speaking in an interview with Point Entertainment & Lifestyle on Tuesday at The Point newsroom, the Senegambian movie star said she is very delighted to be awarded as the best Senegambia movie star.

“This is a big achievement for me as a movie star and to the Senegambia in particular,” she said. The Senegambian movie star was accompanied by a high-powered delegation of the Senegalese Star TV to The Point Newspaper.

Upon their arrival at The Point, the delegation met with senior journalists including the Managing director of the paper Mr Pap Saine.

Last year, in the USA, Binta won the NAFCA 2012 prestigious award of the best actress of the year, amid the presence of 55 very famous contestants amongst the nominees.

Binta Goudiaby is both a Senegalese and Gambian movie star. The winner of the NAFCA 2012 of the best actress of the year in Nollywood was once a beauty queen who won MISS Ziguinchor region in 1998, and was subsequently a runner-up of MISS Senegal 1998, as well as winning Miss Wow Gambia, the same year.

She became the main judge of Miss Nigeria in Canada in 2011 and an award presenter in Nollywood & African Film Critics Awards-(NAFCA Awards) in North Carolina during the same year.

In 2011, a part of the Senegalese Community in the United States awarded a certificate of recognition to Binta for her work and involvement in promoting African Culture and Arts globally.

She was subsequently awarded her Nollywood Whose Who Certificate of induction in October 2011.

She was also an award presenter and a special guest of that WMIFF 2013 ceremony, which took place in Washington DC, USA.

This glamorous and stylish young lady with imposing height is also a firmly convinced humanitarian who seeks to personally contribute to education and providing opportunities and necessary skills for entrepreneurship, especially for girls and women in general.

In 2012, she received the American Red Cross Award for humanitarian work during Hurricane Katrina’s disaster.

Back in her home country, she was awarded the Governor of Ziguinchor’s prize for her efforts towards development and peace in Casamance as well as being raised to the Crown Of Peace in Casamance and Ambassador of Peace of SOS Casamance NGO.

In March 2013, Binta made an encounter with President Yahya Jammeh that inspired her a lot for the rest of her career.