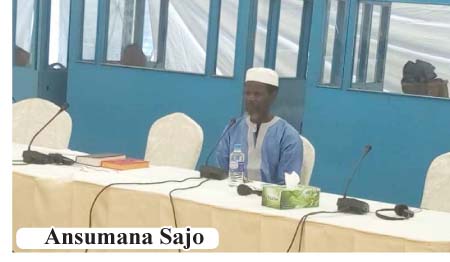 An alleged victim during the 2009 national witch-hunt exercise orchestrated by the exiled Gambian president, Yahya Jammeh has informed the TRRC that he held former president and the APRC government responsible for what happened to him.

Ansumana Sajo, who appeared before the TRRC on Wednesday, observed that his health condition worsen after he was forced to drink a concoction during a raid at his community.

He recalled that when they were arrested by the witch hunters and taken to Kololi, they gave him and others some concoctions to drink, which taste bitter and made them feel unconscious.

On how he was captured, Sajo maintained that he was told by his friend that he was an elderly person in the village and if he refused to go with the witch-hunters, the Green boys will come for him and beat him.

He explained that those who arrested him wore red attires.

He, however, clarify that the witch hunters did not have drums with them at that time, but there were people drumming at the village Bantaba.

He also testified that the witch hunters went to the village rice fields to collect some women referred to be witches.

“Maram Bah was the one that led to my arrest as he put a pan in his workshop. One Duguday Ceesay was also arrested. I can’t name some victims publicly because it will cause trouble in Makumbaya”.

He continued: “Morro Ceesay from Faraba was the camera man for the witch hunters. At Baba Jobe’s house I was given the concoction to drink and after I drank two cups of concoction, I threw the rest contained in the cup.”

The witness further indicated that they were asked to take bath with the medicine provided, saying they all slept where they sat down on that day.

He noted that after drinking the concoction, he was unable to drink water neither took bath or perform ablution.

“The following day I was bathed with the same medication and also given more of the concoction to drink again. I drank it three times in two days.”

After returning from Makumbaya, he said he was interviewed by Halifa Sallah.

He also disclosed that the same Kebba Jammeh alias K.B. Jammeh led the police officers to his compound and was whisked away to Banjulinding. And upon arrival, he noted that they were taken to Police Headquarters were he saw Halifa Sallah again.

The witness acknowledged that after he drank the concoctions, he developed severe stomach pain for three consecutive days and one of his brothers’ sons came from Cassamance helped him during his treatment.

After this nightmare, Sajo now blames Yahya Jammeh and the APRC government responsible of what happened to him.