Ebrima Marreh the principal witness for the prosecution has said he had a disagreement about money with former CDS Lt. General Lang Tombong Tamba. The witnessed is presently being cross-examined by defence counsel in the ongoing treason trial under way at the High Court in Banjul.

When the court resumed on Wednesday, and it was put to him that he took a cheque belonging to Lt. General Tamba "went to the bank and cashed the cheque without anybody's permission", Marreh said "Yes".

However, when the defence counsel said: "In other words, you stole the cheque without the owners knowledge?" the witness said "No".

When the counsel for the defence further asked whether "after it was found out" he was "locked-up in Fajara Barracks?" Marreh answered "Yes."

He also agreed that the amount on the cheque collected from Lt. General Tamba's supermarket was D28,000 and that the cheque was cashed at Access Bank.

What follows are the Questions and Answers in the cross-examination of the witness by defence counsel beginning on Tuesday:

Q-         At the time you claimed to have attended meetings with some accused persons, was Bwiam your address?

Q-         On the 22nd March 2010 in your evidence in chief you said the accused persons had series of meetings concerning the coup plot and you were present in some of the meetings?

Q-         Can you remember the date of the first and second meetings?

Q-         You said the first two meeting took place at Kololi and the third in Bijilo?

Q-         Did you observe the presence of soldiers in the said house?

Q-         In your evidence-in-chief, you did say you went to your friend Kuluteh Manneh?

Q-         Did you know that Kuluteh Manneh in his statement said that he did not know you?

Q-         In your statement in November 2009, you made mention that you had a disagreement with former CDS, and that you apologized and the matter was settled?

Q-         Then you went to the bank and cashed the cheque without anybody's permission?

Q-         In other words, you stole the cheque without the owners knowledge?

Q-         Were you ever accused of breaking down the door of the late Musa Jammeh?

Q-         Was a complaint ever made against you by Mayor Yankuba Colley?

Q-         Are you also aware of a complaint made against you by one Turro Darboe?

Q-         I put it to you that you did not spend the night in the company of Kawsu Camara (Bombardier).

Q-         Did you know that every Friday the 4th accused collects fuel in Kombo?

Q-         How much was the amount on the cheque you collected from General Tamba's Supermarket?

Q-         Mr. Marreh you mean you made another statement, other than the one you are holding?

Q-         In the statement you made have you mention the name of Abdoulie Joof at all?

Q-         When you spoke to the current CDS Masanneh Kinteh what name did you use?

Q-         When you were investigated how many coup plots did you mention to the investigators?

Q ?       How long does it take between the third meeting and the execution of your assignment?

Q-         You claim that first accuse Lang Tombong sent you to Senegal. Is that correct?

Q-         If you have mentioned their names on your earlier statement, why was it necessary to repeat it in your statement of the 3rd February 2010?

A-         During the time I was interrogated, their names were mentioned and that day was 21st November 2009, when I wrote my statement. Then on the 3rd of February 2010 I realised that the two accused persons' names were not mentioned. I was then called to write an additional statement.

Q-         I am putting it to you it was the result of the re-arrest that you were invited to make a statement on the 3rd February?

Q-         Which of this evidence is true to accept - that Omar Bun Mbye attended a meeting once or twice?

Q-         When you met the first accused, you told him that you are Ebrima Sanyang, the son of Satou Tamba?

Q -        I put it to you that you must have known that or you will not impersonate someone's nephew?

Q-         I put it to you that you are a professional impersonator who does his home work before approaching?

The presiding judge ordered that this question be expunged from the records.

Q-         I put it to you that you must observe Lang Tombong had soldiers guarding his house?

Q-         Apart from seeing Omar Bun Mbye and Abdoulie Joof at the meetings, did you meet them anywhere else?

Q-         You indicated that he third accused was not present in the third meeting?

A-         I said that Lamin B.O. Badjie, 3rd accused was not present in the first and second meetings, but was there in the third meeting.

Q-         Do you remember that former IGP Essa Badjie and Director General of NIA were involved in a coup plot?

A-         I never stated that. What I said was that at the time I was caught at Farafenni, I called the 4th and 5th accused and informed them that I was caught. They told me not to mention their names, instead ex-IGP, ex-deputy CDS, current CDS and Director General of NIA.

Q-         Do you want to tell the court that when you were arrested, you had access to telephone calls ?

A-         I have not, and the reason why I did not mention his name was because at the 1st and 2nd meetings he was not present, but he was present on the day I was introduced to Rui Jabbi Gasssama, and I saw him.

Q-         During your detention did you have any confrontation with Lamin B.O. Badjie?

Q-         On the day you were arrested, was it the day you made a phone call to Kawsu Camara and Modou Gaye?

Q-         Yesterday in your evidence-in-chief, you said Lie Joof brought his money in cheque?

Q-         I also put it to you that in your first confrontation with Modou Gaye you denied knowing him? 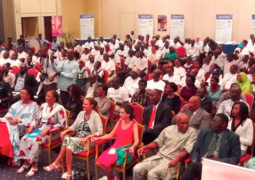