Once again the Charity FROGS (Friends of Gambian Schools) has risen to the challenge and come up trumps. Sally Reader, FROGS coordinator, was approached by the grandparent of a young pupil who saw that the children of Winnie's Day Care and Kindergarten, in , were desperate for somewhere where they could play out of doors.

On visiting the school, Sally and Malcolm Reader, both FROGS representatives, found a well-run school with a bare back yard that could be transformed into a safe and exciting play area. They set to work and three weeks later were handing over the finished product. A play area divided into a soft playing surface with sand, wooden toys and a hard area painted with floor games.

The surrounding walls have also been decorated with wall paintings of an alphabet snake, various number games in the shape of space rockets, snails and ladybirds and targets to throw balls at. The painting was done by Malcolm and Sally Reader and Alieu Ceesay, a former pupil of the Headmistress.

The wooden toys were expertly made by G and S Ltd., a carpentry business on the airport road at Brusubi.

At a gathering of parents, teachers, pupils and well wishers, the play area was handed over to Miss Winifred Addisson, the Proprietor. Nina, the five-year-old head girl, made a short speech and presented Sally Reader with a bunch of flowers.

Malcolm Reader addressed the gathering and said how pleased he was that FROGS have been able to help the school. 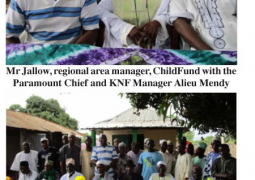