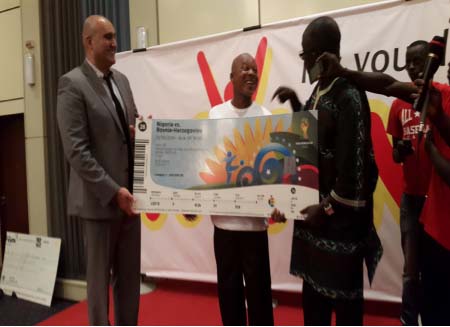 The leading Gambian sports betting and gaming company, WINNER, on Sunday 8 June 2014 conducted its highly anticipated and much talked-about grand raffle draw which saw the revelation of the eagerly-awaited lucky winner that will be sent to Brazil to attend the FIFA World Cup games.

The draw, which took place at the Kairaba Beach Hotel, also decided the winner of the 2nd and 3rd prizes, which are D30,000 cash and 10 free tickets to play WINNER virtual games.

WINNER provides big time sports, real action and an exciting atmosphere where football fans and sports lovers can get closer to the games than before as it has established a new product in the Gambian market called virtual sports games.

Tunde Fatade emerged the lucky winner of the first prize whilst one Pa Alieu Sohna and Sarjo Darboe won the 2nd and 3rd positions respectively.

Speaking to journalists after the presentation of his mega ticket, the joyous Tunde Fatade described the award as ‘a dream come true’.

He said he was part of the first customers of WINNER and had pumped in thousands of dalasis which bore the fruit of the day.

As a Nigerian national, Mr Tunde said this will avail him the first opportunity of watching the live game of his country.

With 14-year teaching experience in The Gambia, the ‘winner of WINNER’ said the day was his happiest on the surface of the country, adding that he had been a long-time admirer of the Nigerian national team and that his teaching salary could get him a ticket to Brazil.

Pa Alieu Sohna, the 2nd winner, expressed how delighted he felt to win this huge amount of money.

Even though he was not very certain of winning at the time of betting, Pa Alieu said he had been a vibrant client of WINNER over the past months.

He said Winner is a genuine betting and gaming company that is enthusiastic about helping sports fans succeed through their passion for the game.

While assuring journalists that the money will be immaculately utilised, Pa Alieu revealed his deep passion for sports, saying Manchester United are his favorite football club.

The third winner, who went home with 10 virtual tickets, also expressed similar sentiments as did the other winners.

He said he was overwhelmed to have won the 10 virtual tickets as they could change his whole life if things materialized.

He thanked WINNER for what he described as their ‘kind gesture’.

For his part, the Chief Executive Officer of WINNER Ltd, Tzahi Asulin, said their aim is to raise standards of the sport betting and gaming sector in The Gambia.

Sending one lucky winner to Brazil, he added, is a way of saying “thank you” to their valuable customers and of providing an added value to gain.

Whilst promising that more is on the way coming, the CEO said his company was created with the philosophy of doing good, adding that they encourage impact investing and responsible gaming.

“WINNER’s vision is to create a dynamic gaming sector in The Gambia, while also enhancing the quality of life for local communities and youth development in sports,” Mr Asulin concludes, saying the company had recruited over 80 employees and projects that would employ over 120 people before the end of the year.