Prostitution they say is an old profession that has been going on for a very long time.

But the word prostitution itself is very disheartening to hear.

This trade is now becoming a very worrying trend which is causing so many ills in the society, which if not taken seriously will result in so many societal problems.

Prostitution comes in so many different forms, and is not only associated with women but also men.

In The Gambia, the concept people have about the trade is that only women are engaged in it, which is totally a very wrong concept.

There are men that are also engaged in the trade, but in a different form.

Some men act as middle-men for the women by arranging for them where they should meet with their customers, and later they will be compensated.

So tell me, is that also not part of prostitution?

But the most worrying part of this menace is that girls as young as eighteen years of age are also engaged in this immoral act, which is very detrimental to their health and well-being.

Some will even go to the extent of saying that they are engaged in the profession because of poverty, which is not a reasonable explanation at all, because I do not believe that poverty should warrant a person to engage in such immoral behaviour.

This profession was only associated with non-Gambians nationals in the past, but nowadays, our very own sisters are the ones that are most present in the trade.

Just take a stroll around town at night; then you will fully see yourself what is going on. Girls that are engaged in this trade should look for other alternatives, rather than engaging in this harmful profession.

Let them remember that one fine day, they will become mothers and their children will want to know how and what they were engaged in during their youthful years - and what will they explain to them when that happens?

Sometimes, where I see our sisters parading themselves at Senegambia, and I wonder if they don’t have parents to advise them at home. Or are their parents the very one who are encouraging them to turn into prostitution?

Let us all join hands and bring this menace to a halt, because it is now getting out of control.

The country wants youths that will bring meaningful development to the country in the future, and not a society that will turn to an immoral one like what we are seeing in other countries. 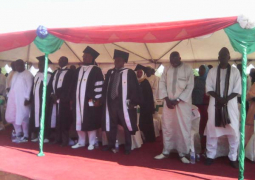