Recurring drought, conflict, and instability have led to severe food shortages. Many countries have struggled with extreme poverty for decades, so they lack government and community support systems to help their struggling families.

A compressed cycle of recurring drought is plunging the same communities into drought again before they have a chance to recover sufficiently from the last one.

In South Sudan, where people fled their homes because of violence, few farmers have been able to harvest a crop. This limits what is available at community markets and raises food prices. Also, during the rainy season, 60% of the country is inaccessible by roads, which limits transportation of food aid as well as goods sent to market.

From March through May 2018, long rains were 150% to 200% above normal in some East Africa locations. This brought some relief to herders as livestock benefitted from renewed grasslands. However, in many places, flash floods and overflowing rivers wiped out crops, roads, and bridges, thwarting both cultivation and relief activities.

In such conditions, poor families can’t afford enough food to keep their children healthy, and eventually, they need emergency help from government agencies or aid groups when they run out of money and food. We’re not talking low funds or food that’s been in our pantry that’s well past its expiration. We’re talking about not having any money or any food at all — nothing.

The longer these factors persist, the harder it is for families to stave off the effects of lost livelihoods and homes. 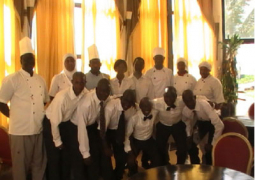