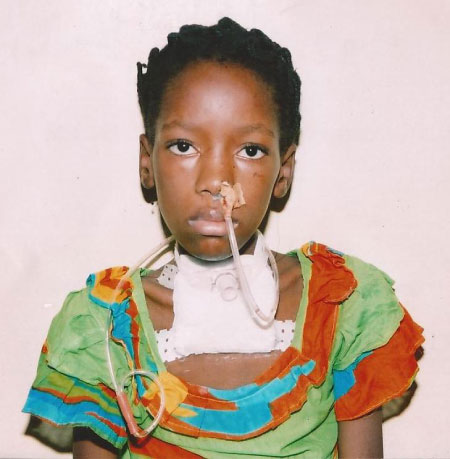 Haddijiatou Jallow, aged 10, is in dire need of help as she is in a critical condition for the past three weeks with fever, throat pain and difficulty to breathing.

The family in Latrikunda Sabiji is soliciting support from the general public to help them in finding solution to the girl’s severe ailment, to save her life.

The family is also appealing to the government, the NGOs and philanthropists to come to the aid of the child for an overseas treatment, as recommended by her medical report.

According to the medical report obtained from the Royal Victoria Teaching Hospital, the patient is suffering from noisy breathing and difficulty in swallowing.

The report indicated that Haddijatou was first seen at the MRC as an outpatient, noting that three days prior to presentation, she started bleeding from both the mouth and the nose.

It was further indicated that she was taken to the MRC, got admitted for three days until bleeding subsided and finally referred to the RVTH.

“On examination, she had nasal flashing with congestion. The tonsils were swollen erythematous with thick secretion. There was slough of tissue that spontaneously drops off from the mouth,” the report reveals, indicating that the slough was taken for cytology report but result is still not available.

“We had an impression of nasophasengeal tumour of 5.05 cm in diameter as confirmed by CT scan. As we don’t have the means to operate on this child, with the delay to receive the cytology result I therefore recommend for an overseas treatment,” the doctor’s report states.