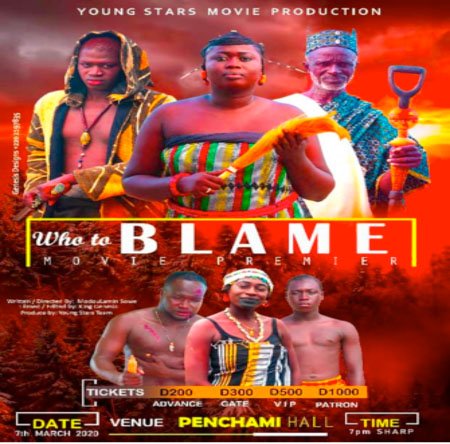 One of Gambia’s talented filmmakers who established Young Stars Movie Production have slated a date to premiere another movie titled ‘Who To Blame’ on March 6 at Pencha Mi hall of Paradise Suites hotel in Kololi.

Modou Lamin Sowe, Chief Executive Officer of the production house that started as a drama group in Brusubi, said he was part of the founders and became the first president.

He explained that they were inspired to form a movie production after shooting a movie title The Shadows of our culture in Manduar, which brought a lot of comments at home. “That’s the reason why we decided to expand it, instead of being only for school drama thing.”

Mr. Sowe said the production was registered in June 2017 with the National Center for Arts and Culture and he became the CEO, saying they are now recommended.

In turning the drama as movie production, he said his foreign movie director Mustapha Kamara alias Kayz was among the ones who inspired him.

Sowe, whose aims and objectives have to do with creating a platform for Gambians and nurturing those who have passion in acting, said he will use the media as a way of preaching instead of other bad habits.

“We do filming for the purpose of educating, informing and entertaining the people,” Sowe said as director of the movie. He said the movie industry is a desert that need to be watered in which he has a role to play.

According to him, Who to blame is a hiding thing and will be exposed on March 6 at Pencha Mi hall.

Exposing his obstacles, Sowe said finance is a main challenge, saying the concept of the people in the environment, the hiding talents that people are not ready to showcase and having untalented Cameramen who lied so much that they can do the work, which is not true.

In building the nation’s economy, he reiterated that the movie industry or talents play 50% of it. “Linking ourselves with other countries like Nigeria and Ghana and checking their economic growth, filmmaking is contributed a lot.”

He called on the sponsors and the government to help filmmakers, saying the industry can reduce the rate of crimes among young people.

“I want Gambians to show us some support, as they give to foreigners who they believe are doing well. We want the government to give us the platform to send out our messages. We want Gambians to know that they have great sons and daughters who are ready to contribute their quarter to the productive sector of our economy.”