What do we know about the life treating disease called Meningitis Causes, symptoms, diagnose, treatments

Meningitis is a word you might hear on the news. That’s because there are sometimes outbreaks of meningitis at schools or colleges and it can be a serious illness.

Meningitis is generally caused by infection of viruses, bacteria, fungi, parasites, and certain organisms. Anatomical defects or weak immune systems may be linked to recurrent bacterial meningitis. In the majority of cases the cause is a virus. However, some non-infectious causes of meningitis also exist.

Although viral meningitis is the most common, it is rarely a serious infection. It can be caused by a number of different viruses, such as mosquito-borne viruses. There is no specific treatment for this type of meningitis. In the vast majority of cases the illness resolves itself within a week without any complications.

A type of streptococci, called group B streptococci commonly inhabits the vagina and is a common cause of meningitis among premature babies and newborns during the first week of life. Escherichia coli, which inhabit the digestive tract, may also cause meningitis among newborns. Meningitis that occurs during epidemics can affect newborns.

Bacterial meningitis in children under 5

Children under five years of age in countries that do not offer the vaccine are generally infected by Hemophiliacs influenza type B.

About 80% of all adult meningitis are caused by N. meningitides and S. pneumonia. People over 50 years of age have an increased risk of meningitis.

People who received a recent trauma to the skull are at increased risk of bacteria in their nasal cavity entering the meningeal space. Patients with a cerebral shunt or related device also run a higher risk of infection with staphylococci and pseudomonas through those devices.

People with weak immune systems are also at higher risk of infection with staphylococci and pseudomonas.

Rarely or some infection to the head or neck area may lead to meningitis. People who have received a cochlear implant run a higher risk of developing pneumococcal meningitis.

In babies, you should look out for at least one of the following symptoms:

-being difficult to wake

-floppy and listless or stiff with jerky movements

-red or purple spots that do not fade under pressure

What are the Symptoms of Meningitis?

Usually, someone with meningitis is very sick. Symptoms may include:

·a very bad headache that won’t go away

·eye pain when exposed to light

·nausea, or being sick to the stomach

·vomiting, or throwing up

·feeling very sleepy or unable to fully wake up

·feeling very confused or out of it

In someone suspected of having meningitis, blood tests are performed for markers of inflammation (e.g. C-reactive protein, complete blood count), as well as blood cultures.

The most important test in identifying or ruling out meningitis is analysis of the cerebrospinal fluid through lumbar puncture (LP, spinal tap).However, lumbar puncture is contraindicated if there is a mass in the brain (tumor or abscess) or the intracranial pressure (ICP) is elevated, as it may lead to brain hernia ion. If someone is at risk for either a mass or raised ICP (recent head injury, a known immune system problem, localizing neurological signs, or evidence on examination of a raised ICP), a CT or MRI scan is recommended prior to the lumbar puncture.

This applies in 45% of all adult cases.If a CT or MRI is required before LP, or if LP proves difficult, professional guidelines suggest that antibiotics should be administered first to prevent delay in treatment,[4] especially if this may be longer than 30 minutes.Often, CT or MRI scans are performed at a later stage to assess for complications of meningitis.

In severe forms of meningitis, monitoring of blood electrolytes may be important; for example, hyponatremia is common in bacterial meningitis, due to a combination of factors, including dehydration, the inappropriate secretion of the antidiuretic hormone (SIADH), or overly aggressive intravenous fluid administration.

What is the treatment for meningitis?

Meningitis treatment will generally depend on four main factors:

-The age of the patient

-The severity of the infection

-What organism is causing it?

-Are other medical conditions present?

Viral meningitis will resolve itself fairly quickly and does not usually need any medical treatment. If symptoms continue after two weeks the person should see his/her doctor.

The treatment for severe meningitis, which is nearly always bacterial (but can be viral), may require hospitalization, and includes:

Antibiotics - usually administered intravenously by injection, or through an IV.

Blood tests - measuring the patient’s blood sugar and sodium is important, as well as other vital body chemicals.

Are there ever complications?

Unfortunately, if treatment is not undergone immediately, there may be permanent damage. Seizures, mental impairment and paralysis may belief long.

Is there a vaccine for bacterial meningitis?

Yes, a vaccine is available, and the Centers for Disease Control and Prevention have specific guidelines regarding who should receive the vaccine.

Who is most at risk for Meningitis?

Anyone can develop just about any kind of meningitis. But research has shown that some age groups have higher rates of meningitis than others. They are:

Studies have shown that meningitis is more of a danger for people with certain medical conditions, such as a damaged or missing spleen, chronic disease, or immune system disorders.

Because certain germs that cause meningitis can be contagious, outbreaks are most likely to occur in places where people are living in close quarters. So college students in dorms or army recruits in barracks are at higher risk. So are people travelling to areas where meningitis is more common, such as parts of Africa.

How does someone get Meningitis?

The body has natural defenses against infections and usually even if someone comes across a virus or bacteria that can cause meningitis, the body can fight it off. Everyone has lots of germs living on and in their bodies. Most of the time, these germs don’t cause any illness. In fact, some of them, like some of the bacteria normally found in the intestines, help the body to work properly.

However, some germs do cause infections. If a person gets an infection, the body’s immune system will go to work to fight it. That’s why you might feel sick one day, but then you start to feel better. The immune system is doing its job. Some germs, however, are tricky. They can outsmart the body’s defences and spread inside of the body. Some of these germ scan even invade the central nervous system, infecting the meninges and causing meningitis.

Can Meningitis be prevented?

If someone gets bacterial meningitis in your neighborhood or school, doctors will want to know who was in close contact with this person. Close contact means living with or spending a lot of time with the person, or sharing the same utensils or cups.

This is important because people who have been in close contact may need antibiotics for a few days, just in case they were infected with the bacteria, too. The antibiotic may help prevent them from developing meningitis. But antibiotics won’t prevent sickness if a virus caused the meningitis.

For further information, you can receive information about Meningitis and vaccination from the Ministry of Health, Hospitals and Clinics throughout the country. You can also send email to azadehhassan@yahoo.co.uk, text to 00220-7774469/3774469 or call on Dr Azadeh live Health show on West coast Radio every Tue. From 6-pm. 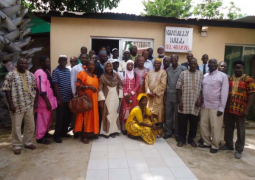