The initiative was meant to restore ecosystems, fight against encroachment of the river and increase livelihoods of populations.

The two-day intensive mangrove planting exercise, held at the river boundary sides of the villages, was actively participated in by youth in the villages.

The Canary Current Land Marine Ecosystem (CCLME) project was funded by the United Nations Environment Programme (UNEP) and implemented by Wetlands International Africa and International Union for Conservation of Nature.

Speaking at the exercise, Pape Diomaye Thiare, Wetlands International Africa’s communication officer and media coordinator, thanked the communities of both villages for their active participation in the exercise.

The turnout and active participation of the people has shown that the communities have a great concern for the restoration of their lost habitats.

The project, he noted, has been operating in the two villages for the past three years and some significant changes have been realized at their riverbank sides, especially in terms of getting back their habitats, “compared to the past when a lot of destruction was done to the small fish and other species”.

He said further: “This project is here to help not only the said villages but also the country at large as mangrove reforestation is key to our livelihood.”

The project is expected to end in 2014, after which an assessment will be conducted for its possible extension, Mr Thiare disclosed.

He used the opportunity to thank officials of the NEA, Forestry Department, and Parks and Wildlife for their technical advice in the implementation of the project in The Gambia.

For his part, the Alkalo of Sandeng village, Lamin Touray, hailed the move by Wetlands International Africa, describing it as a step in the right direction.

He also commended the project officials and all those who took part in the exercise, assuring them that the villagers would continue to support the project to ensure its success and sustainability.

Speaking earlier, Kawsu Jammeh, environment education officer at Parks and Wildlife, highlighted the significance of mangrove restoration in the environment while describing the exercise as timely and relevant.

“All is geared towards restoring back our lost habitats and small species in our environment, which are key for our future generations,” he said.

He then challenged the communities of both Bondali Tenda and Sandeng to take the project seriously as “it will greatly help” them.

For his part, Lamin Njie, a senior forestry officer, who is also the focal person in The Gambia, said CCLME’s undertaking of the project was made possible due to the ratification of the Mangrove Charter.

According to him, the plan of action on the initiative of CCLME partnership with UNEP is mainly focused on the revitalization of the marine and coastal ecosystem and the improvement of the livelihoods of population.

He went further to thank the donors and implementers for piloting the project in The Gambia.

“The project will go a long way in helping the Gambians in the restoration of our habitats and ecosystem,” he noted. 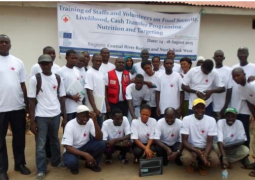