He told the court that he lives at Kerr Sering, and is a businessman, and that he knew Ben Jammeh, adding that Ben is his first cousin, and that he also knew the accused person.

Mr Jammeh added that in April 2013, Ben Jammeh was charged before the Banjul Magistrates’ Court.

He said that while at the Banjul police station, Ben Jammeh gave him two numbers, a Qcell line 3955669 and Gamcel number 9955669, and asked him to call the numbers, and that it was one Manyima Bojang that called him to come to the court. She came to the court and they sat together.

The witness also told the court that he could remember meeting the accused person (Manyima Bojang) for the first time at the University of The Gambia and in Kanilai, where she introduced herself as a law student.

He said that at the Banjul Magistrates’ Court, Ben Jammeh was granted bail and the matter was transferred to the High Court, adding that they applied for bail.

Moses Jammeh further stated that throughout the bail process, he had been in contact with the accused person.

He further indicated that on 23 April 2013, Ben Jammeh was granted bail at the High Court, but the accused was not present in court, and that he called the accused.

He added that the accused came to the High Court for the first time.

He said that the accused was very angry when the bailiff went to Mile 2 to collect Ben, adding that Ben was released on bail, and they left.

He testified that Ben was always with the accused after he was released on bail, adding that on 11 May 2013, he called the accused to find out if she was in her house.

Moses Jammeh adduced that the accused told him that she was not in her house but with Ben and his Lawyers in a meeting, adding that Ben confirmed what the accused had said.

He testified that, three hours after that, he called Ben again and Ben confirmed that they had concluded their meeting and was moving with the accused.

Moses Jammeh told the court that, on 13 May 2013, he had a business engagement and could not go to court, adding that from 8 am to 2 pm he kept his phone on silence.

He said when he came from the meeting, he saw some missed calls, and one of them was his relative, adding that he called back the numbers and the accused told him that she went to court and Ben was nowhere to be found, adding that there was no call and text from the accused.

He narrated that the first person he called was the accused, but could not reach her because she would not pick up the call, adding that he called Ben’s wife at 3 pm, and they proceeded to Ben’s house.

He said when he was talking to Ben’s wife in their house, the accused returned his call and said she was speaking to somebody at the time, but saw his call, adding that he asked the accused if she knew whether Ben did not turn up in court, and she said she was aware and asked him to pass by her house so that they could talk.

He adduced that when she went to her house at Sukuta, the first thing he thought of was that Ben had committed suicide, adding that the accused assured him that Ben would not commit suicide, and that something must have happened and both of them needed to find out.

He testified that throughout the discussion he told her that he was going round the police stations and to the border post to look for Ben, adding that the accused told him that the NIA had ordered Ben’s arrest, and it was their duty to look for him.

He said when they were coming from her house, at her door, the accused warned him to be careful about who to talk to and where he was going, adding that the accused told him that she would call him about Ben’s whereabouts.

He added that the accused should have been the first person to look for Ben, since she was very chose to him, adding that he was not aware if Ben had met with another person.

He told the court that he was the only one calling the accused, when Ben disappeared. 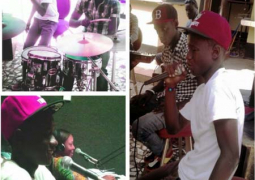