Nyanga Sallah, head coach of Serrekunda East FC, has said their goal was to capture the three points against Gunjur United FC to raise their hopes of being in the race for promotion to the topflight league next season.

“It was difficult coming into and also during the game,” he said, adding that they played the whole first half without being able to score a goal.

“But the question is whether we can maintain our winning run,” the coach said in a post-match interview.

“We will go back and work hard with the players and also put that winning mentality in them,” he went on, adding that if they maintain consistency in the upcoming matches they would be promoted this season.

“I will not promise the fans because the decision is left in the hands of Allah,” he remarked, adding that what he could tell them is, they “will keep fighting”.

Lamin Darboe, head coach of Gunjur United, said the game was not difficult; rather it was just hard luck for them because they played “really well”.

“I respect Serrekunda East FC but looking at the game, we should have won but hard luck,” he stated, adding that in any competition to start with a loss is not good, “but we will go back and see what went wrong and try to rectify it”.

“At the moment with our position, we can be promoted and we are really fighting for promotion,” he said, adding that in any competition one should aim at the highest. 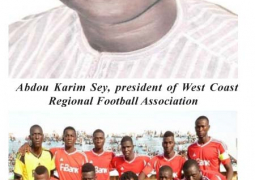