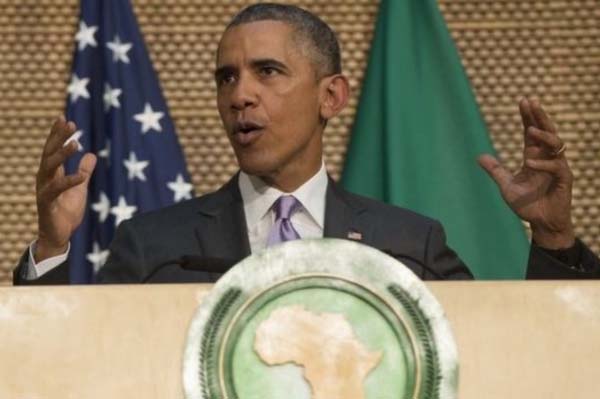 US President Barack Obama has ended his visit to Africa by warning the continent will not advance if its leaders refuse to step down when their terms end.

“Nobody should be president for life,” Mr Obama said.

He was speaking at the African Union’s headquarters in Ethiopia’s capital, Addis Ababa, the first time a sitting US president has addressed the body.

Earlier in the trip, Mr Obama visited Kenya, the homeland of his late father.

“I don’t understand why people want to stay so long, especially when they have got a lot of money,” he told the 54-member AU, an apparent criticism of African leaders who have done just that.

Calling on the AU to ensure leaders respect their constitutions and step down when their term ends, Mr Obama specifically mentioned Burundi, whose president Pierre Nkurunziza has controversially been re-elected for a third term.

“Sometimes you will hear leaders say ‘I’m the only person who can hold this nation together.’ If that’s true, then that leader has failed to truly build their nation.”

He said democracy was about more than just holding elections: “When journalists are put behind bars for doing their jobs or activists are threatened as governments crackdown on civil society then you may have democracy in name, but not in substance.”

And he joked about his own chances of another term in office, which he is constitutionally barred from seeking.

He also called for an end to the “cancer of corruption”, saying it was the key to unlocking Africa’s economic potential.

The money could be used to create jobs and build schools and hospitals, Mr Obama said.

The rapid economic growth in Africa was changing “old stereotypes” of a continent hit by war and poverty, he said.

But unemployment needed to be urgently tackled on a continent whose one billion people will double in a few decades, Mr Obama said.

“We need only look to the Middle East and North Africa to see that large numbers of young people with no jobs and stifled voices can fuel instability and disorder,” he added.

In echoes of his speech in the Kenyan capital Nairobi, Mr Obama condemned the repression of women, saying the “single best indicator of whether a nation will succeed is how it treats its women”.

His address to the AU marks the end of his five-day visit to Africa.

The trip has focused heavily on trade and security, but he also found time in Kenya to meet relatives of his father, including his half-sister Auma.

Verbatim highlight of some key points by President Obama

As President, I’ve worked to transform America’s relationship with Africa -- so that we’re truly listening to our African friends and working together, as equal partners.  And I’m proud of the progress that we’ve made.  We’ve boosted American exports to this region, part of trade that supports jobs for Africans and Americans.  To sustain our momentum -- and with the bipartisan support of some of the outstanding members of Congress who are here today -- 20 of them who are here today -- I recently signed the 10-year renewal of the African Growth and Opportunity Act.  (Applause.)  And I want to thank them all.  Why don’t they stand very briefly so you can see them, because they’ve done outstanding work.  (Applause.)

Now, even with Africa’s impressive progress, we must acknowledge that many of these gains rest on a fragile foundation.  Alongside new wealth, hundreds of millions of Africans still endure extreme poverty.

Moreover, as the youngest and fastest-growing continent, Africa’s population in the coming decades will double to some two billion people, and many of them will be young, under 18.  Now, on the one hand, this could bring tremendous opportunities as these young Africans harness new technologies and ignite new growth and reforms.

Economists will tell you that countries, regions, continents grow faster with younger populations.  It’s a demographic edge and advantage -- but only if those young people are being trained.  We need only to look at the Middle East and North Africa to see that large numbers of young people with no jobs and stifled voices can fuel instability and disorder.

I suggest to you that the most urgent task facing Africa today and for decades ahead is to create opportunity for this next generation.  (Applause.)  And this will be an enormous undertaking.  Africa will need to generate millions more jobs than it’s doing right now.  And time is of the essence.  The choices made today will shape the trajectory of Africa, and therefore, the world for decades to come.  And as your partner and your friend, allow me to suggest several ways that we can meet this challenge together.

Nothing will unlock Africa’s economic potential more than ending the cancer of corruption.  (Applause.)  And you are right that it is not just a problem of Africa, it is a problem of those who do business with Africa.  It is not unique to Africa -- corruption exists all over the world, including in the United States.  But here in Africa, corruption drains billions of dollars from economies that can’t afford to lose billions of dollars -- that’s money that could be used to create jobs and build hospitals and schools.  And when someone has to pay a bribe just to start a business or go to school, or get an official to do the job they’re supposed to be doing anyway -- that’s not “the African way.”  (Applause.)  It undermines the dignity of the people you represent.

I believe Africa’s progress will also depend on democracy, because Africans, like people everywhere, deserve the dignity of being in control of their own lives.  (Applause.)  We all know what the ingredients of real democracy are.  They include free and fair elections, but also freedom of speech and the press, freedom of assembly.  These rights are universal.  They’re written into African constitutions.  (Applause.)  The African Charter on Human and Peoples Rights declares that “every individual shall have the right to the respect of the dignity inherent in a human being.”

From Sierra Leone, Ghana, Benin, to Botswana, Namibia, South Africa, democracy has taken root.  In Nigeria, more than 28 million voters bravely cast their ballots and power transferred as it should -- peacefully.  (Applause.)

Yet at this very moment, these same freedoms are denied to many Africans.  And I have to proclaim, democracy is not just formal elections.  (Applause.)  When journalists are put behind bars for doing their jobs, or activists are threatened as governments crack down on civil society -- (applause) -- then you may have democracy in name, but not in substance.  (Applause.)   And I’m convinced that nations cannot realize the full promise of independence until they fully protect the rights of their people. And this is true even for countries that have made important democratic progress.

Our American democracy is not perfect.  We’ve worked for many years -- (applause) -- but one thing we do is we continually reexamine to figure out how we can make our democracy better.  And that’s a force of strength for us, being willing to look and see honestly what we need to be doing to fulfill the promise of our founding documents.

And every country has to go through that process.  No country is perfect, but we have to be honest, and strive to expand freedoms, to broaden democracy.  The bottom line is that when citizens cannot exercise their rights, the world has a responsibility to speak out.  And America will, even if it’s sometimes uncomfortable -- (applause) -- even when it’s sometimes directed toward our friends.

I want to repeat, we do this not because we think our democracy is perfect, or we think that every country has to follow precisely our path.

I have to also say that Africa’s democratic progress is also at risk when leaders refuse to step aside when their terms end.  (Applause.)  Now, let me be honest with you -- I do not understand this.  (Laughter.)  I am in my second term.  It has been an extraordinary privilege for me to serve as President of the United States.  I cannot imagine a greater honor or a more interesting job.  I love my work.  But under our Constitution, I cannot run again.  (Laughter and applause.)  I can’t run again.  I actually think I’m a pretty good President -- I think if I ran I could win.  (Laughter and applause.)  But I can’t.

So there’s a lot that I’d like to do to keep America moving, but the law is the law.  (Applause.)  And no one person is above the law.  Not even the President.  (Applause.)  And I’ll be honest with you -- I’m looking forward to life after being President.  (Laughter.)  I won’t have such a big security detail all the time.  (Laughter.)  It means I can go take a walk.  I can spend time with my family.  I can find other ways to serve.  I can visit Africa more often.  (Applause.)  The point is, I don’t understand why people want to stay so long (Laughter.), especially when they’ve got a lot of money.  (Laughter and applause.)

When a leader tries to change the rules in the middle of the game just to stay in office, it risks instability and strife -- as we’ve seen in Burundi.  (Applause.)  And this is often just a first step down a perilous path.  And sometimes you’ll hear leaders say, well, I’m the only person who can hold this nation together.  (Laughter.)  If that’s true, then that leader has failed to truly build their nation.  (Applause.)

You look at Nelson Mandela -- Madiba, like George Washington, forged a lasting legacy not only because of what they did in office, but because they were willing to leave office and transfer power peacefully.  (Applause.)  And just as the African Union has condemned coups and illegitimate transfers of power, the AU’s authority and strong voice can also help the people of Africa ensure that their leaders abide by term limits and their constitutions.  (Applause.)

And finally, Africa’s progress will depend on upholding the human rights of all people -- for if each of us is to be treated with dignity, each of us must be sure to also extend that same dignity to others.

Africa is the beautiful, talented daughters who are just as capable as Africa’s sons.  (Applause.)  And as a father, I believe that my two daughters have to have the same chance to pursue their dreams as anybody’s son -- and that same thing holds true for girls here in Africa.  (Applause.)  Our girls have to be treated the same.

We can’t let old traditions stand in the way. The march of history shows that we have the capacity to broaden our moral imaginations.  We come to see that some traditions are good for us, they keep us grounded, but that, in our modern world, other traditions set us back.  When African girls are subjected to the mutilation of their bodies, or forced into marriage at the ages of 9 or 10 or 11 -- that sets us back.  That’s not a good tradition.  It needs to end.  (Applause.)

God bless Africa.  God bless the United States of America.  Thank you very much, everybody.  Thank you.  (Applause.)