The Governor of West Coast Region, Alh Lamin Sanneh, has applauded the Gambia Revenue Authority (GRA) for their foresight in taking the bold initiative to engage the district authority in a dialogue sensitization for public awareness about the GRA mandate and responsibility, as well as the duties of the citizen in paying their dues to the state through Value Added Tax.

Governor Sanneh also used the opportunity to hail the GRA vision for trying to generate D5.8 billion in revenue for 2014, from D5.2 billion it collected in 2013.

He was delivering a statement during the opening of a daylong tax seminar for district authority organised by the GRA, held at the regional directorate office region 2 in Brikama, West Coast Region.

He noted that it was a big achievement for the GRA in 2013 and deserved to be commended for their hard work and commitment to national development.

He said there is no doubt that with the participation of all stakeholders the GRA would deliver to expectations in the best interest of the Gambian populace.

He highlighted the importance attached to the dialogue as immeasurable in the sense that the targeted participants, district chiefs are the driving force of the taxpayers in ensuring that the taxes and rates are paid to the government.

He urged the GRA to continue with the sensitization in the interest of the Gambian populace to know the role and essence of the Value Added Tax.

Governor Sanneh also challenged the district authority to ensure their communities pay their dues to the state.

Ansumana Trawally, GRA Commissioner General, underscored the importance attached to the district authority with the aim to sensitize them on the collection of Value Added Tax, as well as the role and responsibility of the GRA in national development.

He said the VAT Act was passed into law by the National Assembly in June 2012 and became operational in January 2013, replacing the sales tax.

According to the Commissioner General, this forms part of the financial management reforms being undertaken by government to come to standards with ECOWAS and other international obligation in The Gambia tax system.

He said the objectives of these reforms are to promote macroeconomic stability, improve revenue mobilisation, promote efficiency in resources allocation, provide information on stock arrears and the public debt, ensure integrity in the budgetary processes and improve resources management and financial accountability.

He thanked the Government of The Gambia for all the support and the UNDP for the collaboration on the implementation of Value Added Tax.

Essa Jallow, GRA Commissioner for Domestic Taxes, reminded the participants that The Gambia depends mainly on taxes to finance its development programmes and projects as well as to provide pubic goods and services for the attainment of its developmental objectives.

He further asserted that the taxes GRA mobilises provide funding for more than 80 per cent of the national budget, calling for collective responsibility in revenue collection. 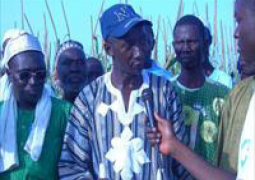