Blue boys Wallidan beat newly promoted side KGI FC 1-0 in the week-five fixtures to rejuvenate their lead in the GFA second division league played at the Banjul KG5 Mini Stadium.

Wallidan’s slender victory over KGI FC was their third consecutive victory in a row since the start of the second tier in March.

Wallidan are also unbeaten and have conceded only a single goal in five outings.

The defeat was KGI’s third consecutive defeat in a row against Lamin United and Bombada United in their previous fixtures.

They are currently rooted at the bottom of the second division league table with only 2 points in five outings. 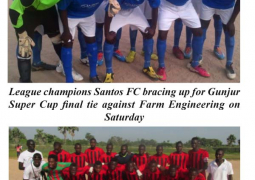