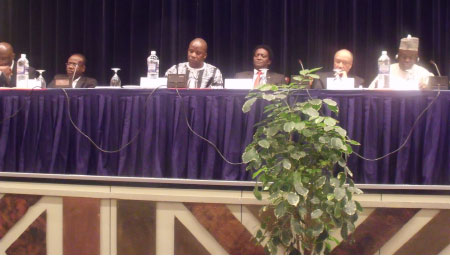 A day-long Extraordinary General Assembly of West Africa Football Union (WAFU) came to a successful but challenging end at the Kairaba Beach Hotel in Kololi on Saturday.

The first-ever gathering of this kind to be hosted by the has witnessed the arrival of 14 out of 16 member-countries’ presidents except and .

Sheriff Gomez, Minister of Youth and Sports, who delivered a lengthy and inspiring speech, said he was delighted to be part of the first Wafu Extraordinary General Assembly in The Gambia.

He seized the opportunity on behalf of President Jammeh and his own behalf to welcome the guests to the Smiling Coast of Africa including two high-profile sports personalities of the World Football Governing Body (FIFA), Danny Jordan, CEO of the 2010 Fifa World Cup in South Africa; and Mohammed Bin Hammam, senior executive member of Fifa, who is also contesting for the forthcoming presidency of Fifa to be held later this year.

Gomez, who registered his thanks and appreciation to the Gambia Football Association for setting the stage for the successful hosting of the Wafu General Assembly for the first time, said: "It is the Gambian government that continues to finance our sports and therefore it is only natural that the government is interested in sports development but most importantly we want to see accountability, effective and efficient utilization of resources.

"The ultimate aim is to realize value of the issue in our collective efforts to choosing quality athletes and a holistic development of the game we come to love so much."

The country's Youth and Sports Minister used the forum to thank the Gambian leader for what he referred to as his commitment in creating and facilitating football development in the country while informing the gathering that sports development has taken 80 per cent of his ministry's agenda, adding that further attestation to this fact is the Gambia for Gold initiative meant to finance sport.

"It is my belief that if the sub-region continues to enjoy its position of exporting quality footballers in the continent who plays the game in every corner of the world, Wafu, National Football Associations, and the governments must invest more time to provide resources in grassroots and community football to ensure quality supply change of talents in football," Gomez said.

Almamy Kabele Camara, representative of the president of the Confederation of African Football (CAF), Issa Hayatou, extends appreciation to Wafu for their brilliant efforts in organizing a series of successful football competitions in .

He said Caf's first mission is to deliver the message of peace and stability in Africa that is experiencing political unrest in some countries including , as he advised the continent to reunite to develop .

The president of the Gambia Football Association, Seedy Kinteh, said: "It is a joy for the to host this Assembly." He also thanked Wafu for |its trust" in chosen as the host of such an important gathering.

Kinteh, who described the meeting as an incredible event, urged his fellow Wafu members to narrow their differences and to work towards reaching the promise land.