West African Foundation for Advancement of Education ( WAFA) is set to promote quality education inmember countries of West African Examinations Council (WAEC), such as The Gambia, Sierra Leone, Nigeria and Ghana, through the provision of opportunities at their doorsteps.

This information was disclosed to the press in a recent interview granted by board members of the newly established charitable educational foundation ahead of plans to launch it on August 9 2014, at the Faculty of Law, University of the Gambia (UTG), on MDI Road.

They spoke in detail about the objectives of the newly established educational foundation set to advance the cause of education in the member countries, through the provision of opportunities in various formats.

The delegation also seized the opportunity to invite the general public to the official launching of the foundation on August 9 2014, at the Faculty of Law, UTG, to be presided over by the Vice Chancellor of the University of The Gambia (UTG), Professor Mohammed Kah.

According to the chairperson, the foundation was established in 2013, and will be officially launched on August 9, 2014, which will mark the official opening of the foundation’s operations in all the WAEC member countries cited, with a view to promoting quality, affordable and accessible education to all regardless of statutes.

Mr Kamara added that the foundation would seek to give support to students from the said member countries through the provision of scholarships and other incentives to needy and deserving students.

“Our main objectives are meant among others to promote, protect, preserve the rights, interest and welfare of students through the use of legal framework and other policy directives,” Mr Kamara said.

“We intend to build capacities and human resource development through the provision of quality, accessible and affordable education to all children as a right at all stages of their development,” the chairperson explained.

The vice chairperson, Nadet V. Norman, said the foundation’s objectives would be channeled through the provision of different formats such as education, training and other outreach programmes such as mass public awareness campaign about the importance of education and the need for every child to have the right to it at all stages of their development.

She emphasised the need for embracing advocacy among other effective tools in the promotion of education as a right to the general public.

The programme coordinator, Thomas Fuad Touray, said the importance of education could not be overemphasised, citing the 1997 Constitution of The Gambia, which makes a detailed provision for education as a right.

He cited other legal instruments with respect to education as a right and such instruments include article 28 of the Convention on the Rights of the Child (CRC).

According to him, the said article provides among others that state parties should recognize the right of the child to education and should make primary education compulsory and available as well as free for all.

Similar provisions were made in article 11.2 of the African Charter on the Rights and Welfare of the Child and article 21 of the Jomtien Declaration, Mr Touray said.

Commenting on the scale of the launching ceremony, Mr Touray disclosed that the event would be divided into series of activities such as presentation of papers on different topics covering the legal frameworks that promote the rights of children to education in The Gambia, Sierra Leone, Ghana and Nigeria.

The event will also feature an open discussion about the importance of free and compulsory primary education.

However, the finance manager, Mohammed Touray, appealed to the general public for support towards the successful implementation of the foundation’s activities, especially the forthcoming August 9 launching, which he said, will mark the beginning of their active operations in the member countries. 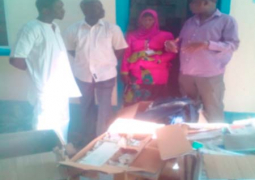