Another Positive Result for Gambia Under-17

The U-17 has yet again produced another encouraging result in its warm up campaign in . They drew 1-1 with Wadidegla FC yesterday, in what was their final test game before heading for on Saturday. Baboucarr Jammeh scored the Darling U-17's only goal in the 21st minute of the first half.

Wadidegla FC is a strong team from and a feeder side to Premier League giants, Arsenal.

In their other test games played recently, the Darling Scorpions defeated Mahaba FC 5-2 and beat the Egyptian U-20 one goal to zero.

The Gambia U-17 side beat the Arab Contractors FC 2-0 last Tuesday.

Seedy MB Kinteh, President of The Gambia Football Association said the team (including all players currently in camp) will leave  Egypt on Saturday and arrive in Algeria March 16th 2009, two days before the opening of the 8th African U-17 tournament.

The Darling U-17 left on February 16th for for an intensive training camp having fallen in a tough group with teams like , Guinea Conakry and host .

The four semi-finalists in the tournament, scheduled March 19 to April 3, will qualify for the 2009 FIFA Under-17 World Cup to be played in later this year.

The Darling scorpions, who beat 2-0 in a friendly match played in recently, will open their group game with the same side on March 19, in Zeralda. The team will also take on  on March 22, before their final group campaign against hosts on March 2 5. 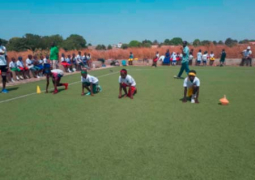