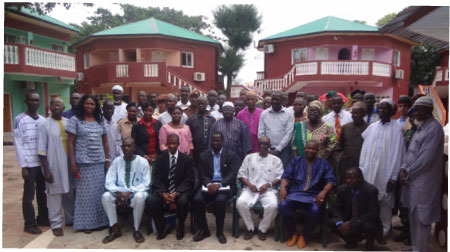 A two-day stakeholders sensitization on ECOWAS harmonised seed and agrochemical regulations is under way at the Baobab Hotel.

The programme brought together participants from various partner institutions such as the Immigration, the Gambia Army Force, the police and officials of NARI.

The forum, which attracted over fifty participants, was organised by NARI under the auspices of the West African Agricultural Productivity Programme (WAAPP).

In his remarks on the occasion, the director general of NARI, Dr Badou Jobe, said the workshop is being facilitated by the WAAPP Project in collaboration with NARI and the plant protection services of the department of agriculture.

“It is designed to sensitize relevant stakeholders on the adoption and implementation of regionally harmonised regulation regarding seeds and agrochemical, which are fundamental to sustainable agricultural productivity,” he said.

He added that the overall goal of WAAPP is to contribute to increase agricultural productivity and growth.

The project is to strengthen and scale up regional cooperation in generation of technology, training, and dissemination programmes for regional priority commodities.

“The WAAPP under its component for enabling conditions for regional cooperation and markets integration aims at strengthening the mechanism and procedures for regional technology dissemination and for integration of regional agricultural inputs and markets, so as to allow The Gambia to benefit fully from the regional cooperation, by facilitating cross border trade of agricultural commodities and technology products mainly genetic materials and agrochemical exchange,” he said.

He added that ECOWAS has adopted a common regulation on genetic materials, agrochemical exchange including fertilizers.

In order to mainstream the application of these regulations, each member country of ECOWAS must align its national regulation with that of ECOWAS, he remarked.

He further noted that the regional cooperation strengthening national seed system and effective cooperation will promote seed production and movement across boarders.

He said the harmonization of seed regulation facilitates trade while providing information and protection.

For his part, the WAAPP country coordinator, Sheikh Tijan Sosseh, said the forum was held to sensitize relevant stakeholders about Harmonized ECOWAS Regulation on seed and agrochemical.

The WAAPP seeks to strengthen regional integration and harmonization of policies.

This is among the specific objectives of the WAAPP, he said, adding that there is need to sensitize relevant stakeholders about the ECOWAS Act and Regulation, which is binding on us.

He added that the WAAPP is a ten-year programme initiated by ECOWAS with financial support from the World Bank.

“The main objective of WAAPP is to increase or improve sustainable agricultural production and productivity.

Asheme Cole, deputy permanent secretary of the Ministry of Agriculture, said such events are very important for agricultural development.

He challenged the participants to take the forum serious as their deliberations would have a direct impact on the country’s agricultural development.

For his part, Alieu Badara Joof, liaison officer at the World Bank, challenged NARI and other stakeholders to participate fully in the implementation process of the project.

He noted that Gambians should take ownership of the project and work as a team for the successful implementation of the WAAPP.

He also commended the WAAPP team for their collaboration with NARI.