The narcotics court at the Banjul Magistrates' Court presided over by Principal Magistrate Emmanual Nkea yesterday ordered a trial within a trial over the cautionary statements of the 1st accused person, Rudy Rasoehamid Gazi.

These development follows the application made by Lamin Camara, counsel for Rudy Rasoehamid Gazi, based on the Evidence Act.

"According to my client, he made these cautionary statements under duress, as he was beaten at the time of making these statements," counsel told the court.

"My client also told me that his face was swollen, as a result of the beating," counsel Camara added.

"In the circumstances, I am applying for a vior-dire in the said cautionary statements in accordance with section 31 (2) and 32 of the Evidence Act, particularly section 33 of Evidence Act," he further submitted.

The Director of Public Prosecutions, Richard Chenge, earlier applied to tender the said cautionary statements of the first accused person, through the prosecution's third witness, Karamo Saidykhan, a police officer.

Testifying as the third prosecution, Karamo Saidykhan told the court that, on 28 May 2010 at the NIA headquarters in , he obtained cautionary statements from Rudy Rasoehamid Gazi in the presence of an independent witness, one Babucarr Khan.

The witness identified the said cautionary statements in court, and the DPP then applied to tender the statements.

Defence counsel LS Camara first told the court that the defence was not served with the said cautionary statements, and then went on to object, as mentioned above.

Magistrate Nkea subsequently adjourned the case to Thursday 7th October 2010 for the commencement of the voir dire.

It would be recalled that the nine accused persons sometime in the month of May 2010, at Bonto village in the Western Region and diverse places, were arrested with two and half tonnes of cocaine reportedly amounting to one billion dollars.

Meanwhile, in a separate but related development, the trial of Muminatu Sissay, Fernando Varella; Ephriam Micheal Chiduben a Nigerian national and Godwin Barset, also proceeded yesterday at the narcotics court with the continuation of cross examination of PW1 by defence counsel EE Chime. 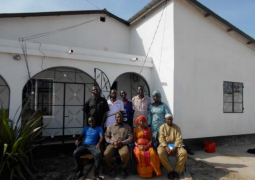