Members of the National Assembly Monday amended the Drug Control Act paving the way for stiffer sentences to be imposed on persons found in possession of cocaine or heroine for the purpose of trafficking.

Under the new Act, a person who is found in possession of more than 250 grams of cocaine or heroine commits the offence of possession for the purpose of drug trafficking, and shall on conviction be sentenced to death.

Also, under the new Act, a person who is found in possession of between 100-250 grams of cocaine or heroine commits the offence of possession for the purpose of drug trafficking, and is liable on conviction to a fine of One Million Dalasis in default to serve 15 years imprisonment and, in addition to this, a minimum of Twenty-Five years and a maximum of Seventy-Five years imprisonment without the option of a fine.

In moving the bill before deputies, Attorney General and Minister of Justice Edward Anthony Gomez said the menace of drug trafficking and the activities of major druglords have started to rear their ugly head in the jurisdiction in recent times.

He told deputies that the devastating impact of these activities on the stability and development of any state cannot be overemphasized.

"Therefore, the bill seeks to nip the negative developments related to drug trafficking in the bud, by providing for sentences which will serve as a deterrent to anyone wishing to use this country either as a transit or destination point for hard drugs," he said.

On the same day, Members of the National Assembly amended the Trafficking in Persons Act, seeking to enhance the penalties attached to trafficking in persons to protect vulnerable persons who are invariably the victims of this despicable practice.

"Both the strategic location of the Gambia as a gateway to the western world, and the liberal immigration policy have attracted the attention of unscrupulous persons in using the country as a transit route for trafficking in persons," Justice Minister Gomez told deputies in proposing the bill.

Also on Monday, deputies amended the Criminal Procedure Code in a bid to enhance the punishments attached to offences like rape and robbery, again to serve as a deterrent to would-be offenders.

In proposing the amendment, the Attorney General and Justice Minister said there has been an increasingly disturbing rise in the occurrence of rape and robbery cases in this jurisdiction in recent times.

"Therefore, there is need to protect the citizens of this country from the anti-social scourge, which is threatening our much-cherished peaceful way of life," he added. 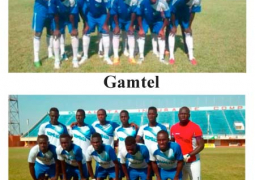