Mrs Ajaratou Binta Jammeh Sidibeh, the Executive Director of the Association for Promotion of Girls and Women Advancement (APGWA) has said that violence in any form against women is discriminatory.

Mrs Sidibeh, who was speaking during a courtesy call she paid to the speaker of the National Assembly, Fatoumatta Jahumpa-Ceesay recently said violence of whatever nature against women is discriminatory and must therefore stop.

She said needs peace to allow girls finish their education and avoid teenage pregnancy, urging women to stand and play their quota to national development.

"Women are doing a lot but still need to do more towards national development. The government is really empowering us but it cannot do it all alone", she said while thanking President Jammeh and his government for their unflinching support to Gambian women, and the world at large.

For his part, the Majority leader and member for Serrekunda East, Fabakary Tombong Jatta said government under the leadership of President Jammeh will always support the empowerment of women and children.

He commended APGWA for their continued support to what he described as a noble course. "To me APGWA is second to none in terms of empowering women and children in both educational, economical and psychological and I believe empowerment of women is the empowerment of the people", he said.

Also speaking earlier, Madam Fatoumatta Jahumpa-Ceesay, speaker of the National Assembly welcomed and thanked APGWA for their commitment and steadfast in the empowerment of women. She also commended President Jammeh for his continued support to women empowerment. "Every Gambian today can be proud of yourself because our President is a leading example in women empowerment and a role model for others", she said. 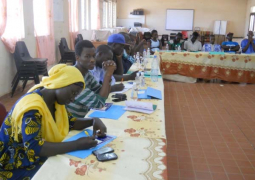