I am honoured to be here this evening, as part of an epoch-making moment in the history of our small but great country. We are assembled here to launch a video documentary that depicts the life and times of Edward Francis Small, his legacy and enduring impact on the political evolution of The Gambia in particular and the West African sub-region at large. But before we proceed, permit me to pay tribute to our young, dynamic professor Pierre Gomez for the stupendous work he is doing in the area of research touching on various facets of Gambian life-literature, history, socio-cultural development etc, consistently building our limited stock of knowledge in these fields. We are proud of him and I pray that Allah grants him the strength and zeal to continue the good work.

The 35 minutes video documentary that I have the pleasure of reviewing for you today, seeks to unveil the truth about a hitherto distorted aspect of the history of Gambian nationalism. It focuses on the indelible role of E.F. Small, a previously unsung national icon, whose determination to liberate his people from the shackles of colonialism, landed him in the bad books of the colonial masters. In this documentary, we hear authoritative testimonies from seven well-known, distinguished personalities namely Mr Baba Sillah, Nana Grey Johnson, Patience Sonko-Godwin, Sam Sarr, Hasoum Ceesay and Sering Secka- eminent authors, journalists, historians and researchers, as well as from James Bolagi Roberts who presented the genealogical/family backdrop of the chronicle.

We know that Edward was of Gambiano-Sierra Leonean stock whose educational pursuits took him back to his original roots, popularly known in those days as the Athens of West Africa. We are reminded that at the time of his birth in Bathurst, in 1891, the African continent was already partitioned in Berlin in 1884. The Gambia was designated as a British sphere of influence granting the subjugators a license to comfortably use and abuse our natural resources and to exploit and mortify our people to further their imperialist and mercantile interests, with outright impudence. But Edward Small, a dedicated defender of fair play, social justice, and national independence rose up and said no when nobody dared to do so.

iThe video offers astonishing details about the trailblazer of Gambian political consciousness, fittingly referred to in the video as the “Voice of Conscience,” vehemently refusing to be a silent, passive bystander, as the colonial system fleeces and dehumanizes his people. He comes out clearly as an ardent supporter of the vulnerable and the downtrodden, taking action whenever there was anything that signalled injustice against the defenceless poor; always ready to courageously accost the authorities on the ground or to write petitions up to the highest level of the colonial hierarchy. He was a fearless challenger of social injustice and human rights violations.This was why the colonialists branded him as their bitter enemy who was poisoning the minds of the ordinary folks referring to him as a ‘dangerous criminal’, ‘a stubborn trouble-maker’ and an ‘agitator.’ They did everything to denounce and discredit him.

This video has many merits. It uncovers the various roles played by this worthy patriot, educationalist, trade unionist, and journalist, democrat, who single handedly laid the solid foundation for the birth of trade unionism and the struggle for political emancipation in The Gambia. It also exposes the mean and insidious intrigues of the colonial authorities who harassed and humiliated him throughout. They succeeded in painting a false, disagreeable image of him, thereby blotting out his towering and pioneering contribution in the resistance movement against British control in The Gambia.

In the area of education, he did a lot to empower the population, especially the farmers and ordinary workers. Being among the few educated blacks in the Gambia, he realized early that the country’s greatest resource was a sensitized and enlightened citizenry, equipped with basic information and knowledge. This would make them capable of standing up for their rights and to bargain their livelihood. He organized evening classes for farmers and other village folks, disseminated information and new knowledge on trading practices, bargaining skills etc., generally creating awareness about their god-given rights and the challenges of nationhood. These opportunities empowered the ordinary man immensely. His passion for educating the people led him to the establishment of the first nationalistic newspaper in The Gambia, and he continued using his journalistic expertise to reach his followers even whilst he was in exile in neighbouring Senegal. His active leadership in the National Congress of British West Africa inspired his dynamism in this area.

Edward Small was an effective trade unionist. He was bent on seeing that the people benefitted from their sweat. He founded The Gambia Farmer’s Cooperative Association in 1917 and the Bathurst Trade Union in 1919, both aiming to bring about improved conditions of work of the indigenous worker especially the farmer. His struggle with the colonial power came to a head in what came to be referred to as the Balangharr Incident. This was where as a missionary posted to the protectorate he saw unfair trading at first hand and his strong protest led to a direct physical bout with one of the powerful traders. This shows how far he was ready to go in fighting for justice and equity for his people.

As the voice of conscience, he is committed to relentlessly promoting the public good, contesting all actions that run counter to his moral and ethical values thereby standing firmly for rectitude and integrity. This is encapsulated in his famous slogan; no taxation without representation; to him it was a moral responsibility to reject the culture of silence and confront the oppressors head-on at whatever cost. The interest of his country and people were paramount, above all else.

In the video, you will find that the terse narratives are interspersed with archival video clips of the ordinary Gambian population going about their daily lives, in the streets of old Bathurst, in the protectorate, in trading seccos, in gatherings of protests and celebrations, all substantiating the testimonies and making the video colourful and true to life. This documentary should attract anyone who is interested in having an impartial and fair appreciation of the genesis of nationalism in The Gambia which developed and grew culminating in the attainment of independence from British rule in February 1965.

Let me conclude by saying that Edward Francis Small is an extraordinary son of the soil whose role in the struggle for national independence from the oppressive colonial and imperialistic domination can no longer be ignored. He is undoubtedly the father of Gambian nationalism who prepared the groundwork for the independence struggle and the principle of elected representation which started with him- having been the first Gambian to be elected by popular vote to the Legislative Council in 1947.Edward Small devoted his life to correcting the deviations and anomalies of colonial rule, fighting for the truth and doing all he could to fight inequality, ignorance and illiteracy among his people.

In putting together, in such a consummate manner, this valuable reconstruction of the trials and tribulations of Edward Small, Professor Gomez and his professional team may also be referred to as another ‘Voice of Conscience’. I am saying this, because, he, like Small, refused to turn a blind eye to the injustice done to Edward Small by history, eclipsing his fundamental contribution in sowing the seeds of self-determination and independence. I believe all of us and indeed, future generations owe Professor Gomez a debt of gratitude. I was particularly touched by not just the emotional closing remarks but by the emotive setting against which the video is closed. A wreath is laid on E F Small’s tomb symbolizing recognition and honour while at the same time affirming, validating his vindication at long, long last. 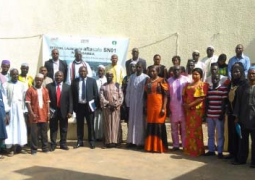