Justice Abi of the Banjul High Court yesterday granted bail to one Lamin MS Jobe, coordinator of the West Africa Agricultural Productivity Programme (WAAPP), in the sum of D3,000,000, with two Gambian sureties each in the sum of D1.5 million with a title deed within the Greater Banjul area.

A valuation report not earlier than yesterday and the applicant’s travelling documents should be tendered, the bail condition further required.

The affidavit in support of the motion stated that the applicant was arraigned before the Bundung Magistrates’ Court on 11 December 2014, and he pleaded not guilty to all counts whereupon the case was transferred to the high court.

The affidavit further stated that the applicant was being detained at the Mile 2 Central Prisons and that he is a father of several children and has never had any problems with the law.

It stated that he would not interfere with witnesses, if granted bail.

The investigations into the case have since been concluded and there was no possibility of the applicant tampering with it, the affidavit further stated.

The charges preferred against him are bailable offences, and he would not interfere with any investigations, it said, adding that the applicant would in no way jump bail and would at all times present himself to the court and any other court, if required to do so.

It stated further that unless the court granted the applicant bail, he would continue to languish in jail until the end of trial, and it was in the interest of justice that the applicant be granted bail.

The charge sheet read at the Bundung Magistrates’ Court stated that Lamin M.S. Jobe, in November 2014 at WAAPP under the Ministry of Agriculture in Abuko, being employed in the public service and by virtue of his position as the Project Coordinator for WAAPP, neglected his duties of properly supervising the accountant, Pa Siabo Beyai, and thereby committed an offence.

Lamin M.S. Jobe was also accused alongside with one Pa Siabo Beyai, that in November 2014 at WAAPP, without following proper procedure, gave a loan to one Kebbeh, who failed to pay the outstanding money of D1, 810,000, and thereby committed an offence. 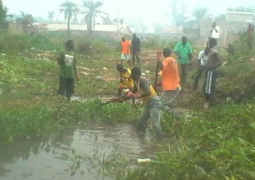