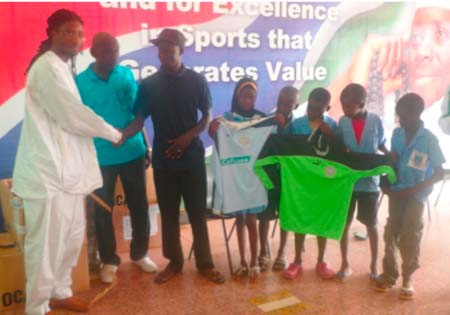 Kassumai Group, a group of individuals comprising both Gambians and non-Gambians residing in Sweden on Sunday 7 August 2016, through Gambian Taekwondo star based in Sweden Gbril Jatta, donated football materials to some institutions and football clubs in The Gambia.

The presentation, held at the Independence Stadium, saw each beneficiary receive a set of jersey, beeps and tracksuits.

Speaking on the occasion, Gibril Jatta said he was motivated to donate to football because there are more football structures in The Gambia, adding that it was also easier for him to work with clubs in Sweden in getting the materials.

The Taekwondo star admitted that even though as a specialist in Taekwondo he loves football and as such this also motivated him to donate to schools he attended and got trained.

He stated that the gesture is one step of the project he aims to bring to The Gambia, noting that he has already donated some materials (Judo mat and heavy bags) to the Judo Federation.

Jatta remarked that he believes in supporting people interested in sport.

He thanked Kassumai Group for their generosity, adding that he hopes the materials will be used for their cause to enable them bring other materials to The Gambia.

He also said they aim to bring a 40foot container to the Gambia between 3 and 6 months provided things flow well. “We have big plans for Gambian sport,” he said.

He added that, they plan to establish an academy at Bakau Lower Basic School.

Abdoulie Hada Bangura, also a coordinator representing the group in The Gambia, said they aim to develop youth football across the country.

He added that they also aim to ensure all regional teams are provided with complete kits.

Pa Alieu Ceesay, president of Magadan FC, in delivering the vote of thanks on behalf of beneficiaries, thanked Gibril and his group for the gesture, saying it came at the right time when the nawetan season in the country is in progress.

He said infrastructure and materials are a problem for Gambian football and as such they were grateful to the donors.

He concluded by urging Gambians in the Diaspora to emulate Gibril and his group, adding that they hope to work together for the development of sport in the country.