The gesture, which brings the total of bulls given to Muslims by the Faji-kunda based business tycoon to 63, followed a month of other benevolence from the VDF among them bags of rice, onion, sugar, dozens of bread and cash amounts to those Muslims in needy daily in respect of the holy month of Ramadan.

The animals were slaughtered and given to the needy in kilos. The gesture, an annual largesse, is geared towards helping needy Muslims to meet the most important rite of the annual Koriteh feast.

Hundreds of people including the young and old, women and children, joined queues at his Churchill’s Town office to benefit from the gesture

At his Banjul-based NGO Vision Development Foundation (VDF) office, a good number of students are currently benefiting from scholarships, all thanks to his generosity.

Speaking to our reporter, Sainabou Jatta, a 62 year old woman said she has been a beneficiary of Turo Darboe’s Ramadan, Koriteh and Tobaski gestures for the past 16 years.

According to her, she and her family have annually benefitted from Ramadan gifts including sugar, rice, meat and even cash from the man hailed by many as a rare philanthropist.

‘‘For the past 16 years, throughout the whole month of Ramadan, all our feeding comes from Turo Darboe. This is a man who continues to put smiles on the faces of thousands of people annually,’’ she said, while calling on all to pray for his long life, good health and God guidance so as to enable helping the poor and the needy.

Fafanding Kuyateh, another beneficiary narrated how he and his family have and continued to benefit from Turo Darboe’s benevolence, noting that such gestures are worth emulating.

According to him, since he came to know Turo Darboe 10 years ago, a lot of burden on him has reduced significantly due to the fact that he has been able to benefit from annually Ramadan, Koriteh and Tobaski gestures from the Faji-kunfda based business tycoon. 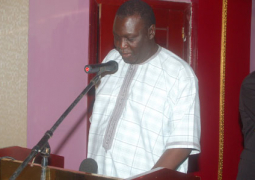