A two-day national validation workshop on Baseline survey report on PROGEBE-Areas recently wrapped-up, at the Baobab Holiday Resort in Bijilo.

The project, among others, aims to preserve and strengthen the genetic characteristics of our indigenous/endemic ruminant livestock (N'Dama cattle, Djallonke sheep and West African Dwarf goats) on a sustainable basis, increase their productivity, improve marketing in a favourable institutional environment for the purpose of improving livelihoods and reduce poverty.

In accordance with the provisions for the implementation of the project, baseline surveys were done in the three project areas of the country, namely Kiang West, Nianija and Niamina East Districts, to establish the numbers, distribution of endemic livestock and their roles in household livelihood strategies.

It is in cognisant of this fact that the workshop was convened with the objective to disseminate baseline study findings (including community input) to national stakeholders, identify partner needs for publication, discuss project strategy orientation in light of finding of baseline studies, including preparation of the project mid-term evaluation.

Declaring the workshop open, the Permanent Secretary at the Ministry of Agriculture, Dr. Amadou Sowe, who also doubles as PROGEBE-Gambia Regional Co-coordinator described the validation workshop as timely and relevant. He said his "ministry is in the right direction of what PROGEBE is up to."

The presentations highlighted that the baseline survey applied clustered sampling within a site (10-11 villages, 10 households/villages). This clustering and correlation between households within the same village, according to the presentations, is not incorporated into the site level scaled-up figures.

The two-day workshop was attended by four officials from the International Livestock Research Institute office in Bamako (Mali). 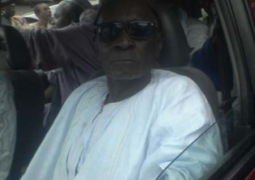