Hell on earth in Italy for Gambian migrants

We have continued to see and read reports about the harrowing condition in which our compatriots in Italy wallow to eke out a living.

Recent reports from Italy stated that Gambian migrants in the Italian camps of the province of Comiso are given 15 euros for their weekly spending, which includes their expenditure on food.

The report further stated that this meager survival means has been the routine in the last 2 years or so.

Living within this means has made life for Gambian migrants in that country increasingly miserable, as they could not adequately feed themselves with that money and take care of certain basic necessities of life.

It would also be recalled that Gambian migrants, like others from other African countries, have continued to struggle to live under harsh conditions in Italy over the years.

Some months ago, it was reported that Italian natives of Via Giordano Bruno, the area of Torino with the highest concentration of African refugees and asylum seekers in Italy, were calling for the eviction and deportation of African immigrants, including our own Gambians.

This situation had forced them to remain indoors, as protests by the indigenes continued.

Such treatments have been making it very difficult for Gambian immigrants in that country to eke out a living.

This is, however, a cause for concern, and we are reiterating our position that something should be done about the situation or condition of our people in Italy.

Indeed our people are human beings who must be treated as such, and with the consideration that no man is an island.

Authorities in both The Gambia and Italy should collaborate to find a solution to the plight of our people in Italy.

Every day we hear over the media the problems and mistreatment our African people are facing in Europe, especially in countries like Italy.

Their problems range from racial discrimination to lack of housing, employment and asylum papers.

This situation is actually letting our people go through hell on earth in Italy.

So it is vital that our governments and the international community cooperate, and put correct measures in place to bring a better solution to the plight of our people in Europe, especially in Italy.

“Every country in Europe needs immigrants for its economic survival..” 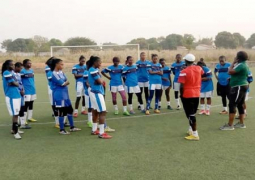