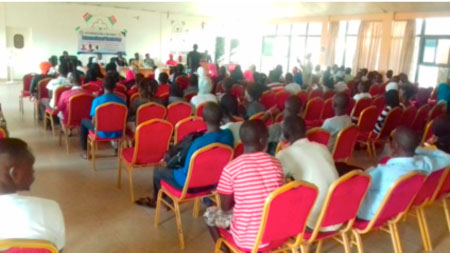 The University of The Gambia UNESCO Club and The Legacy jointly organised a symposium in commemoration of the International Youth Day.

The occasion, which took place on 5 August 2017 at the Law Faculty in Kanifing, brought together students of tertiary schools and youth leaders.

The Secretary General and acting Executive Director of The Legacy, Sheikh Omar Sillah, said The Legacy, as a youth-led NGO has long recognised that young people are a major human resource for development and key agents for social change, economic growth and technology innovation.

He said the organisation has had its officials trained in YALIRLC in Ghana and now serve as one of the leading enterprises for leadership training.

SG Sillah urged the young to be committed and ready to serve their respective communities for a better world.

“We the young people- who make up the largest population of our country- can lead the drive to break patterns of the past and set record straight on course to a more sustainable future,” he stated.

Therefore, he added, their program themed ‘Killing the Tribes for The Nation to Survive’ could not have come at a better time than now as the country has unfortunately witnessed some tribal and partisan conflicts in the aftermath of the presidential and parliamentary elections.

He said the current generation of youth is the largest in history and young people often comprise the majority in countries marked by armed conflict or unrest.

Therefore, considering the needs and aspirations of youth in matters of peace and security is a demographic imperative.

Camara emphasised that young people’s inclusion in the peace and security agenda and in society more broadly, is key to building and sustaining peace.

He noted: “When youth are excluded from political, economic and social spheres and processes, it can be a risk factor for violence and violent forms of conflict.”

Therefore, identifying and addressing the social exclusion of young people is a precondition for sustaining peace.

The Chairman of the National Youth Council, Dembo Kambi, in his commemoration statement, expressed delight about the occasion and noted that the council is ready to work with young people of the country for national development.

He spoke at length about the need for youth participation in the development agenda of the new Gambia.

He said the easiest way for Gambians is to recollect and reflect and stop tribalism is by living each of the clauses found in the national anthem:

“For The Gambia our homeland (not restricted to a particular tribe homeland but all tribes), we strive and work and pray (we cannot strive and work and pray successfully when we are tribally divided)...that all May live in unity, freedom and peace each day; Let’s justice guide our action towards the common good (the common good implies all Gambians are equal irrespective of tribe, religion, social or political contacts,” he noted.

The guest speaker, Momodou Sabally, a former Presidential Affairs Minister and Head of Civil Service, spoke on the role of youth in the political dispensation.

He called on the youth to rally behind the new government and kick start the revolution of preserving the peace and stability of our beloved nation, The Gambia.

He declared: “These are the challenges of our generation and we must do it now. With a fast evolving global socio-economic reality that leaves a lot to be desired, this is the time to create and control a prosperous Gambia for all and sundry without regard to tribe, region or religious orientation!”

Sabally acknowledged that the system needs to reboot, adding that ‘If you are telling someone to be up by the bootstraps, then you must make sure he or she has boots in the first place!’

He concluded: “We have very creative and enterprising young people in this country and given the necessary conducive environment and support, they would thrive and prosper and also boost our nation’s prosperity.”