Think Young Women-The Gambia (TYW), recently organised a two-day UNICEF funded advocacy workshop for young artistes, as they, the artistes are the positive agents of change to end FGM and child marriage.

This year, under their project supported by UNICEF, the organization has embarked on series of activities aimed at addressing gender-based violence, with specific focus on FGM and child marriage.

The activities of advocacy targets young Gambian musicians and poets for a training on FGM and child marriage which seeks to equip them with the knowledge and skills to advocate issues affecting young women and girls in society by using their music to spread the word on the need to eliminate these harmful traditional practices.

Speaking at the opening ceremony, Mr Ngashi Ngongo, UNICEF representative, said because of the socio-cultural and behavioral reasons, many children suffer from harmful practices such as FGM, child marriage and gender-based violence.

He said the practices have a long-term negative social, psychological and health consequences that include urinary incontinence, painful sex, and serious complications at childbirth.

Child marriage has implications on the health and development of children, including the high risk of mortality at the time of childbirth, he stated.

He said that in 2015, the government of The Gambia enacted a law criminalising FGM that included penalties up to life in prison to discourage the perpetrators of these horrible practices.

However, the law has not been implemented and the new government is silent on it.

“The new UNICEF country programme for 2017-2021 includes a strong focus on child protection to prevent and respond to violence, abuse and exploitation of children,” he said.

For her part, Musu Bakoto Sawo, national coordination of TYW, thanked UNICEF for the support and the artistes.

She stressed that at TYW they look at the issues holistically and that religious leaders, artistes, health experts and indeed everyone has a role to play in ending FGM and child marriage in The Gambia.

Lamin Darbo, executive director of National Youth Council, said he appreciates the efforts of TYW, noting that youth are important to the society and working with them required determination.

He described the meeting as timely, saying the people they love inside their hearts are the havoc of FGM and child marriage.

He added that the involvement of young people means they want to rely on young artistes to advocate and educate the public on the dangers of FGM and child marriage to ensure its end.

Ya Sally Njie, a music promoter, thanked the artistes for getting involved in the campaign. 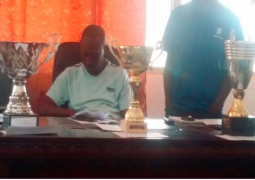