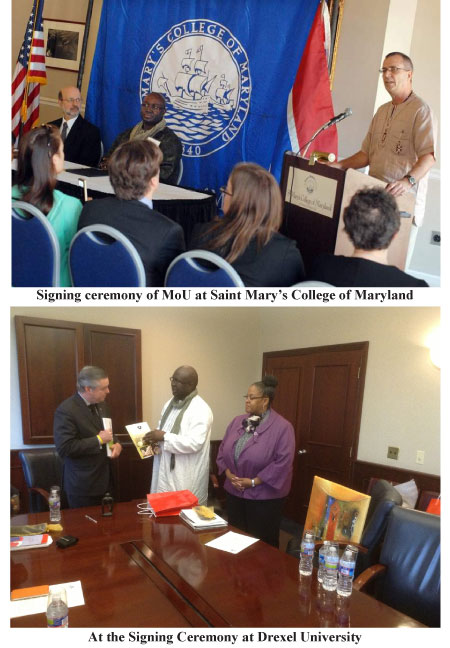 The University of The Gambia recently signed a revised Memorandum of Understanding with Saint Mary’s College of Maryland during an official ceremony held on the College campus attended by the Gambian Ambassador H.E Alieu Ngum, the Deputy Chief of Mission, Mr.  Baboucarr Jallow and Mrs. Fatoumatta Ayo Sidibeh, Cultural Attache.

The first MoU between Saint Mary’s College and the University of The Gambia was signed in 2008. The revised agreement affirms the expansion of educational, professional, intercultural activities and projects among students and staff of both institutions.

A six member delegation from the UTG led by the Vice Chancellor, Professor Muhammadou M.O Kah arrived at Saint Mary’s College on 1st April, 2013 and met with students, staff, and faculty in the days leading up to the signing of the  MOU on 3rd April, 2013.

According to a media dispatch from the UTG, the delegation had fruitful discussions with their counterparts and exchanged ideas on international best practices.

In his remarks during the ceremony, Professor Bill Roberts, Director of the PEACE Programme recounted his days as a Peace Corp Volunteer in The Gambia in 1979 and the positive values he learnt from that experience. According to him the lessons he learnt in The Gambia helped him to be considerate, hospitable and generous.

In his remarks, the Vice Chancellor/President of the University of The Gambia, Professor Muhammadou M.O Kah, described the signing ceremony as “historic” adding that “it is a very important dimension that the two institutions are nurturing and stressed that this is the way higher education is going to evolve.

He added: “We value this great collaboration and partnership with St Mary’s College; it is one of our deepest, strongest and most appreciated collaborations.”

In his remarks, The Gambia’s Ambassador to the USA, His Excellency, Mr. Alieu Ngum, thanked Saint Mary’s College for the collaboration and partnership adding that both institutions stand to gain in diverse ways.

The PEACE programme , which is an exchange programme for students and faculty of both institutions, has grown steadily since its inception in 1996 under the direction of Professor Bill Roberts.

After the signing ceremony at Saint Mary’s College of Maryland, the Vice Chancellor/President, Professor Muhammadou M.O Kah and delegation travelled to Philadelphia for a meeting with officials of Drexel University.

The delegation arrived at Philadelphia on 3rd April, 2013 and on Thursday 4th April, 2013 held series of meetings with some Faculty and staff as well as the Provost of Drexel University. The meetings covered key areas on Faculty/Staff and student exchanges, collaborative research, joint course/programme delivery, internships, short-term staff development, online course delivery and curriculum development.

On 5th April, 2013, a Memorandum of Understanding was signed in the Conference Hall of the President of Drexel University. The Vice Chancellor of UTG, Professor Muhammadou M.O Kah signed on behalf of The University of The Gambia while the President of Drexel University, Professor John Anderson Fry signed on behalf of Drexel University. In attendance at the signing ceremony were the Gambia’s Ambassador to the USA, His Excellency Alieu Ngum, The Gambia’s Permanent Representative to the United Nations, His Excellency Ambassador Tommy and Mrs. Fatoumata Ayo Sidibeh, Cultural Attache at the Gambian Embassy.

In her remarks, Professor Shannon P. Marquez, Director of Global Public Health Initiatives at Drexel University, gave an overview of the collaboration and partnership between the two institutions citing her visit to the Gambia last summer which resulted in the signing of an informal MoU with UTG. She expressed the hope that the collaboration in student and faculty exchange as well as the Power Up Gambia Project, which has so far provided solar energy for Sulayman Junkung General Hospital in Bwiam and Bansang Hospital, will be consolidated and given a new lease of life. Professor Shannon lauded the high degree of internet connectivity in The Gambia and expressed optimism for positive collaboration in Public Health and Medicine. By the same token, Professor Shannon expressed hope that the now UTG acquired MRC Field Station at Farafenni, where numerous cutting edge researches have been conducted,  could serve as a regional hub for public health.

In his remarks during the ceremony, the Vice Chancellor of the University of The Gambia, Professor Muhammadou M.O. Kah, conveyed warm greetings from the Chancellor of the UTG to the Drexel University community and informed the audience of the Chancellor’s unalloyed support towards the development of higher education in The Gambia. He further highlighted the useful discussions he had with the faculty and Deans as well as the possibilities explored for faculty and student exchange, curriculum design/development and staff development. Professor Kah expressed hope of a fruitful collaboration and partnership as UTG and the Drexel University Global Public Health Initiative have submitted funding proposals to the NIH and the USAID.

In his remarks, The Gambia’s Permanent Representative to the United Nations, His Excellency Ambassador Tommy paid glowing tribute to the Chancellor of the UTG for the numerous strides taken since 1994 in the development of education in The Gambia. He pointed out that the Science, Technology and Innovation Policy being finalized at MoHERST is a step in the right direction. In his words, “It is not just the signing of the MoU but how to strategize and make it applicable.” He urged the two institutions to explore research possibilities on Malaria which is still a daunting challenge to eradicate. According to him, herbs exist in West Africa such as Atymecin which could be experimented on in finding a cure for the dreaded malaria parasite.

He expressed readiness to mobilize international partners to join forces with Power Up Gambia Project in increasing the energy resources of The Gambia.

In his remarks, the Gambia’s Ambassador to the USA, His Excellency, Mr. Alieu Ngum, lauded the visit of the Vice Chancellor accompanied by senior officials of the University. He said the discussions and signing of the MoU with Drexel University holds a lot of promise in building the teaching and research capacity of UTG for its science, engineering and medical faculties.

He pointed out that he was quite impressed with the enthusiastic response of Drexel University to the areas for cooperation presented by the Vice Chancellor. He added that both institutions stand to benefit and expand their horizons for providing university education. Ambassador Ngum looked forward to the implementation of the MoU to the satisfaction of both institutions.