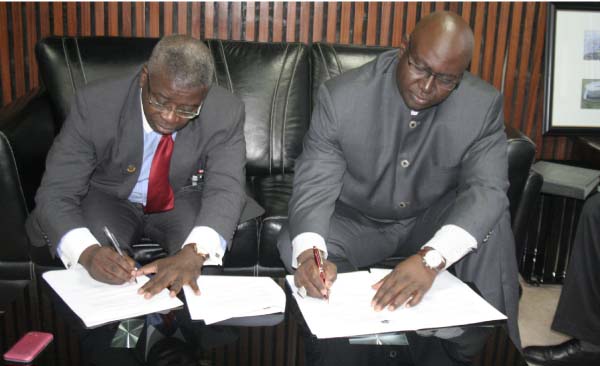 A delegation from the University of The Gambia (UTG) led by the Vice Chancellor, Professor Muhammadou M.O. Kah, recently concluded a five-day visit to Obafemi Awolowo University of Great Ile-Ife in Nigeria, during which a ten-year “strategic framework agreement on capacity building” was signed.

In 2012, a delegation led by the Vice Chancellor of OAU, Professor Bamitale Omole, visited The Gambia, and met with their alumni in The Gambia.

Obafemi Awolowo University in 2014 is ranked among the top ten universities in Africa, and number one in Nigeria.

Professor Omole’s visit in 2012 was followed by another visit in April 2014 led by the deputy Vice Chancellor Academic, Professor Ayobami Salami, which has now resulted in an MoU between the two universities.

A number of prioritized activities have been agreed under the MoU, and they are to commence within six months.

Meanwhile, both universities have agreed to make special efforts, individually and in concert to secure appropriate financing from private, state, provincial, national, non-governmental and international agencies to support the activities contemplated in the Agreement.

The two institutions agreed to continue discussion of particular joint projects and exchanges.