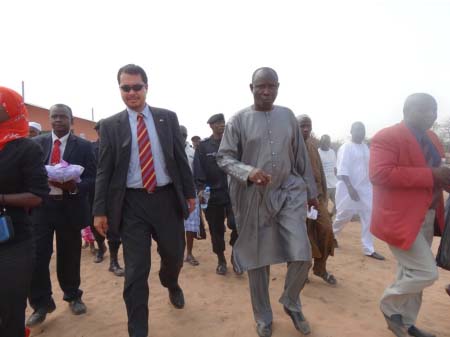 The Water and Sanitation component of the USAID/Ba-Nafaa-funded project recently ended a two-day handing-over ceremony of the Water, Sanitation and Hygiene (WASH) facilities to the oyster and fishing communities of Kamalo, Old Jeshwang both in the Kanifing Municipality and Brufut in West Coast Region.

During the handing-over ceremony at the sites, the Minister of Fisheries and Water Resources, Mass Axi Gai, said the handing-over of the WASH facilities was indeed historic for the communities of the said sites and the fisheries sector in general.

He told the gathering that the Government of The Gambia, under the leadership of President Yahya Jammeh, has given priority and attention to the development and sustainable management of the fisheries sector.

He reaffirmed that the policy framework for the fisheries sector in The Gambia is provided by the 2007 Fisheries Act and 2008 Fisheries Regulations.

He thanked the US Government through its Banjul Embassy for funding the project.

Minister Gaye therefore stated that the policy objectives of the fisheries sector Act are linked to key national development objectives that include increasing self-sufficiency and security, a healthy population and enhanced employment opportunity for nationals, increased revenue generation and foreign exchange earnings, and attainment of national, social and economic development.

He reiterated that the provision of water and sanitary facilities to these three communities is very important and a priority achievement which is consistent with PAGE and by extension the MDGs and Vision 2020.

He said the USAID/Ba-Nafaa project was incorporated in 2011 to support the needed water and sanitation activities linked to the artisanal fisheries and community fisheries centers and oyster landing sites.

For his part, the director of Fisheries Department, Nfamara Jerro Dampha, informed the august gathering at the sites that the handing-over of these facilities served as a component to USAID/Ba-Nafaa funded Project.

He said the USAID/Ba-Nafaa project originated from a sister project in Senegal called WULA-Nafaa.

He expressed his appreciation to the supporters of the USAID/Ba-Nafaa project for their funding and GAMWORKS for their quality work.

He also highlighted some of the activities carried out by the USAID/Ba-Nafaa project in the past months while appealing to the local authorities in the catchment areas to pay closer monitoring of the new sites.

Richard T. Yoneoka, Charge’ d’Affaires of the US Embassy in The Gambia, also spoke at the sites, saying the United States is a long-time partner to The Gambia as far back as 1830 when they had their first representative in the country.

He informed the gathering that United States opened their Embassy in The Gambia in 1965 while their first ambassador was sent to The Gambia in 1980, adding that since The Gambia’s Independence the US has been sending large Peace Corps missions to the country.

“Peace Corps The Gambia is one of the largest Peace Corps missions in the world with over 90 volunteers working in The Gambia in three priority areas, namely education, health care and environment,” the US Charge’ d’ Affaires said.

He also said the project was a US$3.5-million initiative, which “is not a small amount from the US taxpayers’ money”.

He commended the three communities for showing ownership to the project.