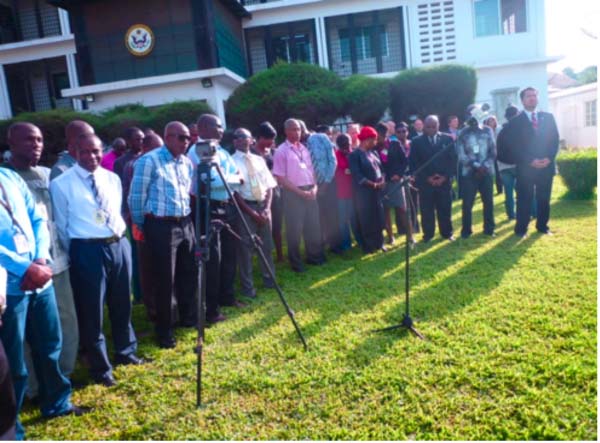 The US Embassy in Banjul Thursday held a ceremony at the grounds of the embassy chancery along Kairaba Avenue to commemorate the 13th anniversary of September 11 terrorist attacks in New York and Washington D.C. US Embassy charge d’ affaires Richard T. Yoneoka delivered the following statement:

“On this day we reflect, we pray, we remember.” He added: “Yet this solemn anniversary is not only about looking back; today is also an opportunity for us to look ahead.

“We look ahead to a world where our children, no matter their race, religion or creed will be safe from the vile threats of people who seek to destroy.

Today we must remind themselves, however, that the conflict against violent extremism is one that continues, one in which we - the United States of America and people around the world - remain steadfast to combat.

“From the atrocities occurring in Syria and Iraq by ISIL to the continued threat of al-Qaida, including its affiliates Boko Haram in Nigeria and al-Shabab in Somalia, the threat of extremism is not behind us. Yet, America remains unwavering in its commitment to combat these forces of evil.

“Over the past month, as ISIL has made territorial gains throughout Syria and Iraq, the United States and our allies have come together, unified in our approach to stop this brutal group.

“As these groups carry out atrocities across nations and continents, we know that what they do does not reflect the peaceful nature of Islam. Yet the threat they represent is real. As such, we must remain vigilant not only in the conflict-ridden areas of the world, but also in the United States and here in The Gambia.

“The Gambia is a nation where religious inclusivity is celebrated, but even here in the Smiling Coast, Gambians are not immune from the threat of radicals who seek to tear communities apart.

“In The Gambia, the threat of terrorism may seem distant, but extremist ideology knows no boundary and respects no borders.

“We must continue to teach tolerance in our schools and communities and to look ahead to a more peaceful future, while we heed the lessons from the past. There is a saying that peace, like war, is waged.

“We stand here today, as Americans and citizens of the world do every year, to remember and pay tribute to the innocent victims who perished thirteen years ago on September 11, 2001.

“We are here to honour their memory this morning, and pray for their friends and family. We are also here to proclaim our admiration for the courage of the survivors, whose anguish - mental and physical - is something they have lived with since that fateful day.

“We also celebrate the responders and those who continue to protect us, the brave men and women who dedicate themselves to keeping us safe.

“Their heroism is something for which we will always remain thankful. As families and communities pulled together in the days following the attacks thirteen years ago, we pray that the world can increasingly come together in the spirit of tolerance and kindness towards one another today and for generations to come.

“Let us look ahead, let us remember. Please join me in a minute of silent prayer and reflection.” 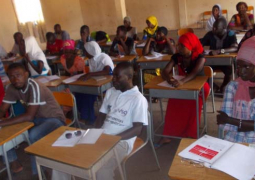