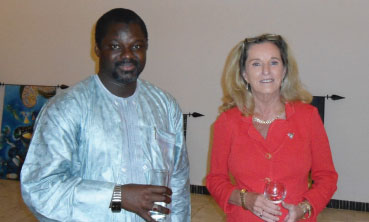 The Embassy of the in , on 1st July commemorated the 235th independence of the , at a reception held at the Coco Ocean Hotel in Bijilo.

The day, which brought together diplomats, cabinet members, civil society members, US embassy officials and a cross-section of the public, marked the signing of the Declaration of Independence and the beginning of a great experiment-American democracy.

Speaking on the occasion, Pamela Ann White, United States Ambassador to The Gambia, told the gathering that strengthening the ties between and on the basis of mutual interest and respect, will always be the cornerstone of her policy.

“This is because today we face challenges that no single country can meet alone; we will only realize the security, prosperity and opportunity that our people seek if we recognize the humanity we share and work together for a common purpose,” she stated.

Ambassador White noted that the tables scattered around the gathering indicated that the is a nation of immigrants.

“People come to our shores from every nation on earth for a myriad of reasons, but with the goal of seeking a better life for themselves and their families. In landing on our soil, they find that they have the right to criticize their adopted country and its leadership - a right denied to most by their countries of birth,” she added.

While underscoring the significance of the event, Ambassador White noted that democracy is a continually evolving process.

She added that this year’s events in , and other places shows that it is a universal right that people are denied for too long, that they demand.

“It is a journey fraught with unexpected events that detour, and when we take for granted the liberties, rights and privileges so embedded in democracy, we are most vulnerable to lose them,” she stated.

Also underscoring President Jammeh’s efforts to the advancement of agriculture, women empowerment and education, the diplomat said the embassy has worked to build on the relationship the has with The Gambia and its people.

She further told the gathering that President Jammeh’s constant vigilance against terrorism and drug trafficking are admirable, and should be emulated by other African countries.

“We stand with him to expand our support for the ’s security, prosperity, and opportunity,” she added.

She commended Comium GSM company for their outstanding contribution to The Gambia by housing the American Corner, a community education and research centre.

Ambassador White also announced that the Gambia Armed Forces will this month host African Endeavour, where over 500 military officers will meet in to learn communication and protocol techniques.

“In this increasingly interconnected world, no nation can solve the problem of economic and social development, terrorism, environment, narco and human trafficking and a host of other issues alone,” she said, noting that “today, more than yesterday we need to tighten the bonds of friendship that bind The Gambia and the ”.

Lamin Kaba Bajo, minister of Fisheries, Water Resources and National Assembly Matters, who was also overseeing the Ministry of Foreign Affairs, conveyed the government’s appreciation and gratitude to the government, adding that The Gambia will always work with the in ensuring global peace, security and social justice.

According to him, the world with time will come to recognize 4th July as a symbol of freedom, liberty, autonomy, sovereignty and self-governance.

Noting that The Gambia holds very dearly the fraternal ties of friendship and cooperation between the two countries, Bajo stated that the multilateral engagement between and remains strong, especially at the level of the UN.