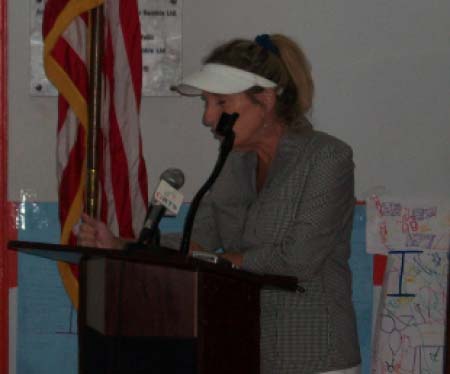 The United States Embassy in Banjul on Monday commenced a weeklong series of basketball training for trainers, administrators, basketball players and referees at the Independence Stadium Basketball lawn in Bakau.

The US embassy is conducting the training in partnership with the Gambia Basketball Federation, Trust Bank, Unique FM Radio, Peace Corp and LG Electronics to improve basketball in the country and expose new talents in the game.

Ahead of the Monday training, officials of the US embassy and partners convened a press conference on the visit of the US-based basketball coach Williams Davies, who is also the instructor of the weeklong training programme.

In his address to a jam-packed room with junior and senior basketball players, the United Sates ambassador to The Gambia commended other sponsors of the training - Gamcel, Gamtel, Trust Bank and LG Electronics - for investing in sports, saying the training would provide opportunity for people to come together and promote peace and the good spirit of sport.

"We can bring nations together and we will all find a way of speaking one language - the language of friendship and sportsmanship," Ambassador White, who could not hide her admiration for the large turnout to the event, told the gathering.

She said that President Barack Obama is a big fan of basketball and that he would love to see the crowd at the American Corner.

For his part, Oreme Joiner, Trust Bank’s general manager of banking, who represented his bank at the press conference, said Trust Bank is proud to be associated with sport as the bank has continued to support sport in the country.

Joiner himself a former national and international basketball player was impressed about the turnout, which he said has shown that people have passion for the game in the country

Joiner, he played basketball during his collage days in the US, said his bank supports sport as part its corporate social responsibility.

For Coach Davies Williams, his mission to The Gambia is to train young and promising basketball players of the country.

He added that he has been a basketball player for many years and will impact the knowledge of the game to the young aspiring Gambians.

"The game makes one improves himself physically and professionally and I am happy that many Gambians are building interest in the game, which is good," he said.

Lamin Fofana of Gamcel marketing department and Momodou Lamin Jatta of Gamtel both reiterated their institution’s willingness in partnering with the US embassy in to support sport in the country.

Pierre Jallow, a professional Gambian basketball player who plies his trade in the US, spoke at the ceremony encouraging young people to be active in basketball as "it is a good game".

Papa Momodou Njie, secretary general of the Gambia Basketball Federation and assistant public affairs officer at the US embassy, commended people for the large turnout, "which has demonstrated how successful the training programme will be".