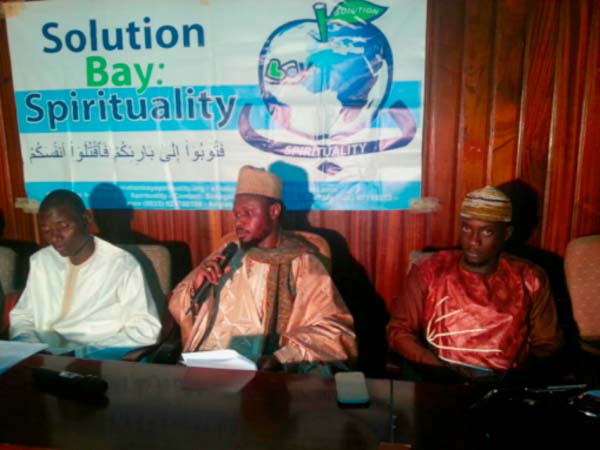 Solution Bay: Spirituality movement over the weekend held a press conference to welcome the new government of the Third Republic of The Gambia.

According to the organisation, during the impasse they were at Karang giving food and rendering help to refugees.

Shortly before the former president conceded to give power, they held a press conference in Dakar, requesting for mediation rather than military intervention.

They thanked Allah, the Merciful, for the light he has bestowed on us, Who has made it possible to disengage the Gambian sky, which had hitherto been covered with darkness.

The organisation of the movement said we owe Allah gratitude for the happy ending in The Gambia, following the post-election crisis.

The Lord proclaimed, “If you are grateful, most certainly I will increase my benefits for you. But if you are ungrateful, my punishment will be terrible “(Sura 14, verse 7).

Thus, they expressed their gratitude to their creator, adding that they are thanking the actors of African diplomacy, in general, and Senegal, in particular.

“Thanks to their patience and steadfastness, the former president left power peacefully,” they said.

They added that this victory is that of democracy and that of the Gambian people, further stating that they are pleased that the solution by Spirituality Movement, in its permanent quest for peace, could not hope for a better outcome.

The movement remarked that the polity the Gambians have always wanted is now a reality.

However, they stated that it crystallizes a great deal of hope demanding from the new authorities, a sense of responsibility for the fulfillment of the electoral promises, and patience and hard work from the Gambian people.

They pointed out that The Gambia is still fragile and it’s (re) construction is possible only with the commitment of its sons.

“This is an opportunity to appeal to all Gambians, from here and elsewhere, to put themselves in a dynamic of construction of our country.”

“The Gambia needs us, our skills, expertise, commitment and wealth,” they added.

They urged the people to be ambitious and come to invest in The Gambia. The development of a strong and sustained social economy is a necessity in order to make the Gambian economy inclusive, and more respectful of fundamental rights and a guarantee of sustainable democracy.

The movement also underscored that although The Gambia is still fragile, because it is in a transitional phase, it is possible to establish democracy permanently and definitively.

A new Gambia is possible with the commitment of Gambians. A Gambia united in its cultural and ethnic diversity, a free but disciplined Gambia, a Gambia rooted in its traditional values, but oriented towards the future, a Gambia reconciled with its immediate neighbours and open to the world. It is this Gambia that must be built!

They also stressed that this Gambia is possible only if there is social peace, a peaceful cohabitation between the different ethnic, religious and political components.

“Cling all together to Allah’s”ropes” (cable) and do not be divided; and remember the favour of Allah upon you: when you were enemies, it was He who reconciled your hearts. Then, by His blessing, you became brothers.”