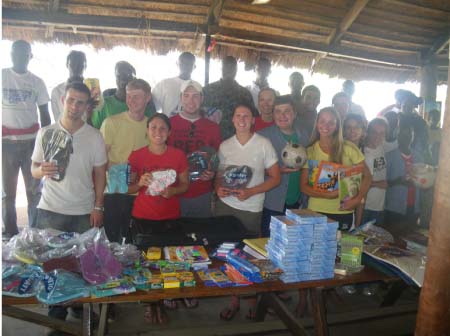 Twelve students from Washington and Jefferson College in the United State led by their lecturer Professor Buba Misawo are currently in The Gambia.

The money donated was raised by Douglas through Give Forward fund-raising in the US.

The presentation, held at Tendaba Camp, was witnessed by the proprietor of Tendaba Camp, Sarjor Touray, parents, teachers, and a cross-section of the community.

The donation came through Run for Tendaba Organisation to help pay for a year school lunch for students of the two schools.

Run for Tendaba Organisation is non-profit organisation founded by Mr Hausladen after visiting Tendaba Village in 2009 with Professor Buba Misawa of Washington and Jefferson College and Mr David White.

Speaking at the presentation ceremony, Professor Buba Misawo, a political science lecturer at Washington and Jefferson College in the United States, said the invaluable relationship started in 1999 when he first visited The Gambia as a Rotarian scholar.

He did visit Tendaba Camp for a week holiday while in The Gambia.

At Tendaba Camp he was able to meet the owner of the camp, Sarjo Touray and discussed with him issues relating to the community.

According to Professor Misawo, there after he developed a programme called the intersection programme of politics and society, West Africa.

Since in 2002, the project has been giving a small contribution to the schools, he said, adding that in 2006, the project decided to do “bigger things” for the schools by constructing a kitchen for the nursery school, set in train a lunch programme for the two schools in Tendaba and buying uniforms for the students.

“We thought this is very important towards the education of the students,” said Professor Misawo.

He stressed the importance the donors attached to the academic aspect and lunch programme of the school and students of Tendaba.

He added that his students have always been supporting him in providing the necessary materials for Tendaba students.

He also thanked one David White and Hausladen for their personal contribution towards the programme. He further revealed that currently there are large numbers of personalities in the United States contributing immensely towards the school’s programme.

“This is an on-going project since the donors are committed to seeing that this project continues,” he said, adding that the aim is to expand the school, by providing more uniforms and other materials every year.

Their visit to The Gambia, he noted, was to introduce the students and let them understand Africa better from the perception of the Senegambia regions.

Misawo further expressed delight on behalf of the Washington and Jefferson College in USA for him and his students for this study trip to The Gambia.

The aim was also to help the community of Tendaba and the Tendaba Lower Basic and Nursery Schools in the Lower River Region.

He explained that this study trip brought them through Senegal then to the Gambia. He said they visited Tendaba village, which has been a central point of their trip.

Professor Misawo also revealed that the donated materials were contributed by all parents of the students of Washington and Jefferson College in USA, collectively and individually.

He then thanked his students for their contribution to the success of the project in ensuring that the Tendaba School has educational learning materials.

This was possible due to the encouragement of the Touray families in Tendaba Camp, Professor Misawo said, while calling on parents, and teachers to take great care of the donated materials and to ensure they are distributed to the students accordingly.

Speaking on behalf of Tendaba Lower Basic School, the head teacher of the school, Mamadi Nyabally, said he was full of happiness and great honour in welcoming the students of Washington and Jefferson College of USA in Tendaba village.

Mr Nyabally thanked the visitors for contributing immensely towards children’s feeding programme and learning in the two schools.

He added that the Tendaba Lower Basic School was established in1995 by the Gambia Government and the school has two permanent blocks with six classrooms.

The school has seven staff including five teaching staff of the Quran, a caretaker and a cook. The school enrolment as at now is sixty children of twenty-four boys and thirty-six girls.

He finally thanked the Washington and Jefferson College, staff and students and parents for rendering priceless assistance to Tendaba schools and the community.

For his part, Seedy Jammeh, Cluster monitor in the area, said the gesture is the second he has witnessed in the history of Tendaba Lower Basic and Nursery Schools.

He asserted that education is indeed an expensive venture which no single government in the world can provide alone.

“The Ministry of Basic and Secondary Education policy has captured partnership as an important component,” Mr Jammeh said. “It is against this background that MoBSE welcomes and encourages genuine partners like Washington and Jefferson College USA, for their support to the poor rural schools of Tendaba.”

The materials and funds that are presented will immensely contribute to the development of the children of The Gambia in particular Tendaba while urging the beneficiary schools to put the materials into good use. 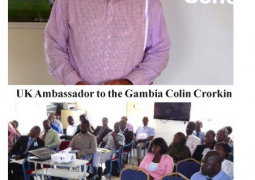 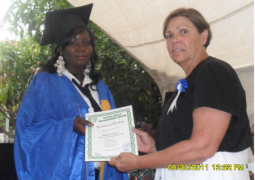